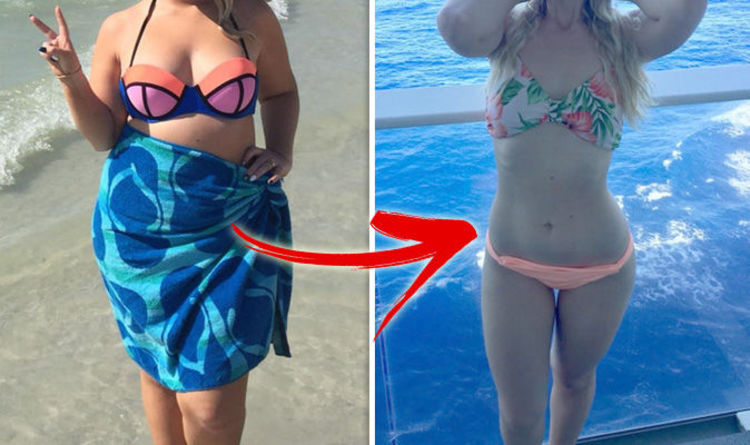 Sharing her before and after pictures on Reddit, user ‘cheburashkniki’ wrote: “I weighed myself in February for the first time in almost two years and about died when I saw I weighed 212 pounds! I weighed as much as my fit 6’2” husband.

“It was such a gross and sad realisation that not only was I out of shape, but obese.

“I started going to the gym with my husband but I was pretty embarrassed and didn’t want to do much besides sit on the stationary bike for the duration of his workouts.

“I just started noticing small things like how much more I was eating or drinking than our other friends and it made me feel awful.”

She then revealed how to she lost so much weight, and said: “I stopped drinking alcohol at the very end of April and got some fat girl pants for the gym and went anyways despite being embarrassed.

“We started basic weight lifting and would do 15-20 minutes of light cardio like the elliptical at the end. At first I would be so frustrated with how weak and fat I was I would start crying while working out (I’m sure I didn’t look insane or anything lolol) but eventually things started getting easier and I was losing weight!

“I can’t forget to mention I started CICO in May and have been strictly eating 1200 calories a day. Working out was nice and has helped me shape my body/manage anxiety and depression, but seriously diet was everything for me.

“I can’t even fathom how many calories I must have been eating before. I recently went on a cruise and let myself indulge but I never went over 1700 calories, and I actually felt ridiculously full.

“I also started counting macros which has helped. Balanced diet, CICO, no alcohol, and weights.”

Some questioned if 1200 calories was enough, and the 24-year-old explained she was “pretty sedentary” so it was plenty for her 5’7” frame.

Breaking down her daily diet, she said: “I normally have a protein shake and overnight oats with fruits, nuts, or chia seeds for breakfast, a lean protein and veggies for lunch, protein bar for a snack, and a protein like chicken for dinner with brown rice and veggies.

“I try to stay away from trigger foods like potato chips because I can and will eat the entire bag.”

Counting calories is a simple and effective way to lose weight – but how many calories should you eat a day?

There is a simple formula that will help you work it out.

The NHS advises men have a daily calorie allowance of 1,900kcal and women 1,400kcal.

However, this will differ widely depending on a number of factors, such as height, current weight and even age.

What Transhumanists Lost by Investing Late in Bitcoin