Weight loss: Why a diet plan that does include potato CAN help you lose weight 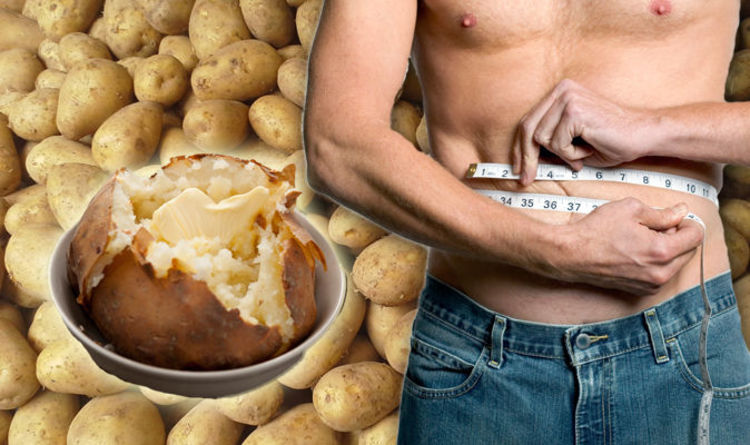 But there is a way to lose weight and still enjoy the demonised carb, and it involves one of the most controversial of all, the potato.

Plain potatoes are fat free and low in calories, as well as being a good source of vitamin C and vitamin B-6.

However, most people do not eat them plain, instead enjoying them fried and smothered in sauce.

Eating them plain, then, is the way forward – but this is not the only reason potatoes work as part of a diet focused on weight loss.

The humble potato has another trick up its sleeve. It scores highly on the “satiety index”, which is a measure of how full and satisfied after eating a food leaves people.

Tested and put together by Susanna Holt of the University of Sydney Australia in 1995, the index discovered the highest score was achieved by the potato.

She recruited volunteers and asked them to eat a single, 240 calories portion of each of the 38 foods.

After consuming each food, participants were asked to rate their hunger levels every 15 minutes, for the next two hours.

After two hours, participants were then taken to a buffet and told to eat as much or as little as they wanted, and Holt then counted how many calories they ate.

This was tested against 38 different foods, with white bread used as a reference and given a score of 100.

Potato gained a score of 323, with no other food coming close. Next closest was ling fish, with 225.

Not only did potato leave participants feeling more satisfied than other foods, they also consumed fewer calories in meals after eating it.

Another study, published in 2014 in the Journal of the American College of Nutrition, compared weight loss in a group of people following reduced-calorie diets with or without potato.

Eating potato did not cause weight gain, it was found.

So, eaten in the right way – baked or sautéed in healthy oil – potato can be part of a successful weight loss diet.

This is not the first time carbs have been recommended for dieters – with one meal portion company saying carbs are essential for a healthy diet.