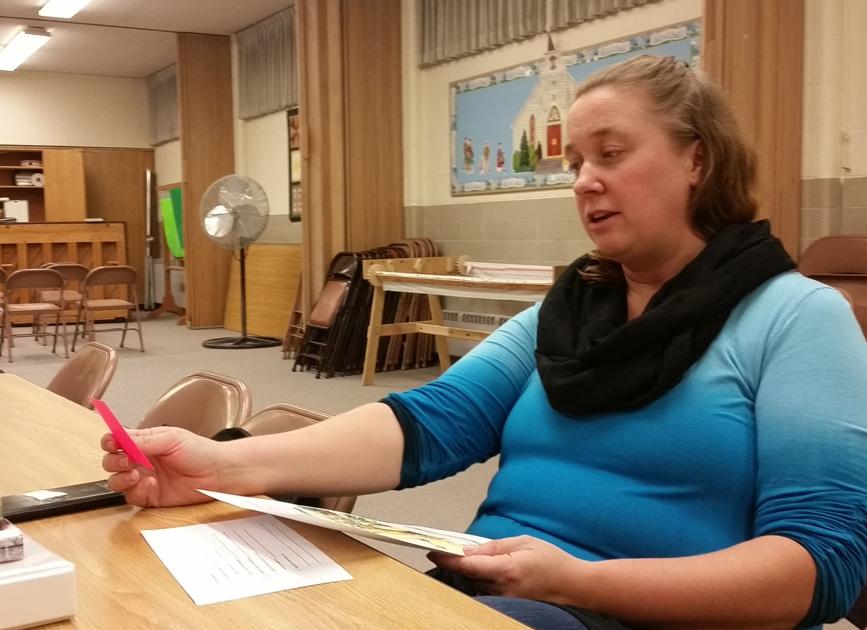 Need to lose weight, but going it alone seems daunting and difficult?

Head to TOPS, a nonprofit weight-loss support group organization that has been helping people take off pounds sensibly since 1948. Learn more at an open house at 7 p.m. Monday, Oct. 30, at Bethlehem United Methodist Church in Hutchinson. Use the north entrance to the church’s lower level. Admission is free and the public is welcome.

She keeps attending the Monday night meetings because she’s accountable to the scale.

“It’s good to see people in the same place you are or struggling more and you try to help them,” she said.

Without TOPS, she has gained.

“I think I quit going at one time, I don’t remember why, but I was higher — about 20 pounds more than I am now,” she said. “I took that off again.”

One of the benefits of TOPS is learning about things such as portion control.

“So many people have no idea about portion control,” Hlavka said. “One lady thought one serving of macaroni and cheese was the wholebox. That astounded me.”

While many people are looking for a magic bullet to drop the pounds, Hlavka was realistic.

“There’s no magic answer,” she said. “You have to do it by yourself. You have to love yourself enough to do it. I told numbers of them, you’re life would be totally different if you’d lose 40, 50 or 60 pounds.”

Tania Krueger, owner of Tania’s Wellness Corner in Hutchinson, officially joined TOPS in July. The reason she hadn’t joined before was because she was juggling family, work and part-time college responsibilities.

She still doesn’t know what made her turn into Ridgewater College years ago, but she earned an Associate of Science degree there and then transferred to Minnesota State University-Mankato where she earned a bachelor’s degree in psychology and a master’s degree in mental health counseling.

“I was familiar with TOPS because I’ve done a lot of motivation speaking and chapter visits,” she said. “I like the camaraderie and the positivity. It’s about learning to make lifestyle changes.”

“It’s about sharing ideas of what’s working for others,” she said. “It’s a happy group and we get group laughs. We have good energy in the group. We all have a common goal. We also know what works for me may not work for them. It’s good camaraderie. It’s a very nonjudgmental group.”

Another plus Krueger noted was that if you have a conflict on Monday meeting night, it’s not the end of the world. Just call another member and let them know.

“We’re grateful for what we have,” she said. “Let’s move forward with that kind of attitude. It’s Thanksgiving month and anything we can do to stay positive is a big motivator, too.”

George Gulso, Dassel, has been a member of the chapter since March or April.

“Everybody is nice to me,” he said.

Her husband, Steve, is an area captain serving Hennepin, Sherburne and Wright Counties.

Schreiner-Kaiser joined TOPS in 1994 to lose weight after having a child. She became area captain in 2004.

TOPS brought Scheiner-Kaiser and her future husband together.

“We met in 2004 at the TOPS International Convention in Pittsburgh,” she said. “It was my first time flying and my first recognition day as area captain. He was State King in 2003. He was being honored, representing Minnesota in Pennsylvania. He had lost 40 pounds.”

“If I wasn’t in TOPS, I wouldn’t be watching my food counting and have the accountability of the scale,” Schreiner-Kaiser said. “Obesity is on the rise and diabetes as well. People need a support group to be accountable for their weight and their actions.”

The group that meets at Bethlehem United has dwindled from a high of 15 members four years ago to six to eight members who now attend per week.

“We’d like as many people as we can get,” she said. “As area captain, I’d like to start a male group, but it’s hard to do that. Men always think of TOPS as a woman’s thing, but it’s slowly changing. Young people can join, too.”

HOW DOES IT WORK?

It starts with a private weigh-in before the meeting. From there, members recite the TOPS pledge and share their successes and challenges. A short program follows, which focuses on health and wellness topics. If needed, there’s a short business meeting and then it closes with an inspirational thought for the week.

The big question everyone asks — what is the diet?

While TOPS advocates a food exchange program, the choice is yours.

“People can follow any plan as long as they are being accountable for their weight,” Schreiner-Kaiser said. “There are so many things out there — whatever works for them. It’s about learning to eat food in moderation.”

“If I wasn’t in TOPS where would my weight be?” Schreiner-Kaiser asked. “There are people who come back after they’ve been gone. It’s because of the accountability.”

Pollution and eye infections: Tips to prevent or get relief from allergic conjunctivitis