Inside a classroom at Bala Avenue Community School, a group of students approach their indoor garden to snip off a piece of basil.

“It smells like mint tea,” says Grade 5 student Patricia. “It smells so good.”

Along with the tower garden — which is also sprouting kale, swiss chard and parsley — the students in this Mount Dennis-area school’s Grade 4 and 5 split class have access to a prep station and bicycle-powered blender to turn the plants and herbs into soups, smoothies and sauces.

The equipment and lessons are provided as part of The Good Food Machine, an initiative from FoodShare Toronto and its corporate partner LoyaltyOne.

The project, which runs at 10 schools in the GTA, is an attempt to increase food literacy and promote healthy eating by giving kids experience growing, harvesting and preparing food in their own classroom.

Now in its second year at Bala Avenue Community School, administrators say it appears to be working.

“I saw change right way,” said teacher Fatma Ibrahim. “A lot of [students], instead of bringing chips and candies and things for snacks, they’re bringing in little tupperware with fruits and vegetables.” 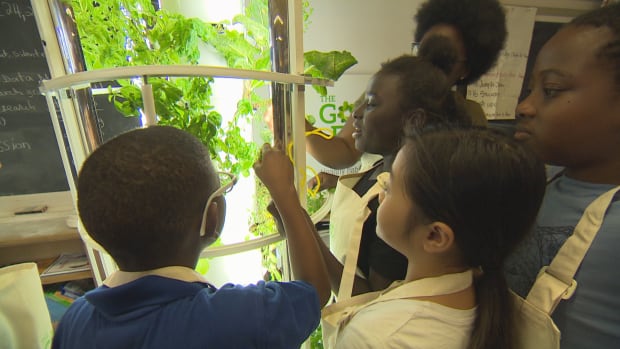 The kids also say the lessons have changed the way they eat, as well as their perception and knowledge of vegetables.

“I didn’t know what herbs were last year,” said 10-year-old Taven, who now eats salads “usually two times a week” made with a variety of different vegetables.

His classmate Michelle says she too eats salads “mostly every day” since the lessons began.

“It’s really good for you,” she said. “You can grow stronger and have a healthy life.”

The project’s organizers say other students are taking that knowledge outside the classroom and making changes to the way their families do their grocery shopping.

“They’re talking to their parents about some of the herbs that they see or recognize in the grocery store and they’re telling their parents ‘oh, we’ve grown this in our classroom,'” said Wynette Tavares of FoodShare Toronto.

However, just as the students are learning more about the benefits of fresh vegetables, Toronto Public Health says eating healthily is becoming increasingly expensive.

A recent survey found that a week’s worth of healthy food now costs $197.55 for a family of four in Toronto, an increase of more than 20 per cent since 2009.

Still, it says efforts to promote healthy eating among young people are worth pursuing. 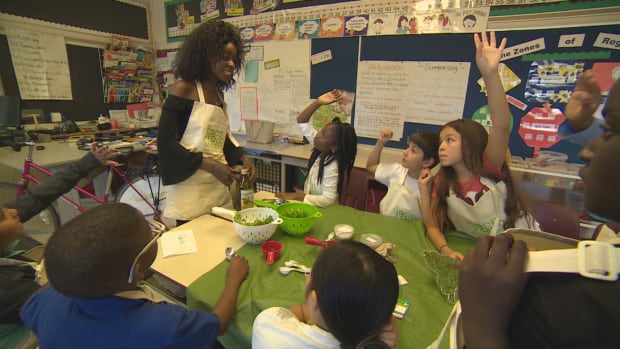 “If we want to look at the side of being healthy and how to create food, food literacy and food skills, certainly working with students in the school is a wonderful avenue,” said Yvonne De Wit, the acting director of chronic disease and injury prevention at Toronto Public Health

Back in the classroom, just minutes after picking a basil leaf from the garden, second-year Good Food Machine student Patricia shows just how far her food skills have come.

After blending the basil with garlic and olive oil in the bike-powered blender, she and her classmates go for a taste of their made-from-scratch pesto.

Most of them are trying the sauce for the first time and don’t much like it. But Patricia has a fix in mind.

“It needs salt, pepper and a tiny bit of garlic,” she said.

Best supplements: Take THIS vitamin to protect against colds and DEADLY Aussie flu