The Risks of Nootropic Use – Psychology Today 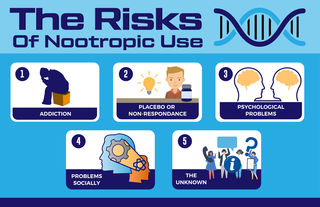 Source: Image by the author

Nootropics—for example, caffeine—are compounds that, if used correctly, are safe and can enhance your cognitive performance and mood.

You can develop tolerance to some of the nootropics if you don’t cycle them. It’s even possible to develop an addiction to some of them. If you have a history of substance abuse, I would suggest you start only with the less potent ones. For example, N-acetylcysteine can help against addictions.

A criterion for a compound to be a nootropic is that the compound should have no risk of addiction if used right. This is not true for certain compounds that some regard as nootropics. Examples of compounds that are risky, especially if you have a history of substance abuse, are Modafinil, Phenibut, Caffeine, and Tianepeptine.

“The dose makes the poison” —Paracelsus

In the initial phase of getting to know the effects of a compound on your body and mind, you should experiment very carefully. Take it slow in the early stages of your exploration. Research the individual compound and be present to what is happening in your body and mind upon consumption.

You waste your money: Placebo or individual non-respondance

The risk is that any good effects you feel are placebo, which means you’re really just wasting your money. I would argue that you are the placebo, though, which entails that placebo-effects are as real as non-placebo ones.

On the other hand, it’s better to find things that work on the biochemical level over the long term. Nootropics vary widely in their efficacy throughout the human population.

For example, one particular SNP (gene variation)—Single Nucleotide Polymorphism—alters the efficacy of Modafinil on the user.

The SNP “rs4680” has been linked to the production of an enzyme that breaks down dopamine in the prefrontal cortex. If your SNP variant is GG you will have the best response to Modafinil. If you’re AG you will have an intermediate response, and if you’re AA you will have a less notable result.

I had my gene test, and my variant is AG, which means I would respond, though not very strongly (comparatively), to Modafinil.

I will write about genetic testing for biohacking purposes in a later post.

The goal of nootropic use for most people is to enhance your psyche, not only the underlying biochemistry. Let’s find out what can go wrong in pursuing that.

Psychological problems are not something you can be completely guarded against, whether you use nootropics or not.

Many nootropics can help people with various psychological conditions, for example, depression and anxiety. The risk you expose yourself to is very dependent on which nootropics you use, and most of all, how you use them.

I’ve gained a lot in my ability to engineer my experience away from psychological problems and psychiatric conditions from reading a lot of books concerning psychiatry, psychology, and mental disorders. While it is good for me in the long term to have explored those waters, it wasn’t a pleasant process. It was very humbling and I discovered how little has to go wrong for a person to end up in a bad place.

Having a growth mindset has been crucial in helping me make sure all the negative effects I ever had from nootropic use were short term and solvable.

You get problems socially

If you get cognitive problems or experience side effects from nootropics, it can definitely affect your career and relationships. Neither the mind nor the biochemical building blocks of which it is made exist in a vacuum; they interact with their environment. Naturally, you will have problems performing if you’re experiencing psychological problems.

In my opinion, nootropics used well can help solve most problems you may have with social anxiety. If you do suffer from social anxiety, please know this: you’re an animal, you’re conditioned, and you can recondition yourself. Nootropics can definitely help you to smoothly start exposing yourself to what was once outside of your comfort zone. Let’s say you boost your calm with ashwagandha and have a public speech. For the long term, it is better for your confidence, career, and abilities to have done it well. In my experience, the memory formation of how your public speech went is stronger than what nootropics you take.

You can use nootropics to get into new habitual ways of being and continue to live the same way after stopping the use of the nootropic.

I cannot stress this point enough: Nootropics should give you benefits and no significant side effects. I believe you can boost your odds of achieving this by being aware of the risks and experimenting cautiously.

There’s limited research on most nootropic compounds, and, for some, the best source of knowledge is people’s personal experience.

There are some nootropics with an inverse risk that have a lot of scientific evidence of being harmless.

If you experiment with the most potent pharmaceutical nootropics, there is a risk that you may create long-term problems for yourself by doing some real damage to your DNA, or by some other unknown mechanism.

My personal philosophy on the more potent ones is to use only some of them, the ones I see the least risk and biggest rewards in. I only use these for special occasions. I never use them two days in a row and am conservative in using them at all.

I’m not concerned with changes in life expectancy as a result of using these nootropics. I believe I’ve already increased my life expectancy way above average by deliberately exercising, eating, meditating, and sleeping.

Technology is evolving at a rapid pace. There’s a great chance that any harm one may do will be fixable when the problem arises.

I’m fully aware I could end up with health problems from using nootropics the wrong way. There’s a big difference between the possibility and probability of that happening though. I’m doing everything in my power to reduce the probability.

The unknown and uncertainty entail an inherent risk for problems. We’re more or less programmed to be anxious and fearful of the unknown by our genes. It served us well on the savanna. Unless we develop deliberate, intentional strategies for handling this fear we will stay in our comfort zones, at the expense of our well-being and self-actualization.

Being anti-fragile means gaining from disorder or problems. If you’re mindful and aware of what’s going on in your mind when you take nootropics instead of being inside what’s going on, you will become robust or anti-fragile to it. During the most low-spirited times, the knowledge that you’re non-existent will get you back on track very fast, often stronger than before.

Whether or not you can detach is biochemically dependent. Our ability to embrace uncertainty is constantly changing. It is in itself uncertain. Should we accept that?

Should we embrace the uncertainty of our constantly changing ability to embrace uncertainty?

My personal opinion is that no, I don’t want to spend hours every day practicing mindfulness to possibly get into a state of mind that embraces uncertainty.

It’s simply more economical time-wise and results-wise to work with your body deliberately, for example, by using nootropics that work well for you specifically, in contrast to going with the flow of your body’s fluctuations and mishaps.

Biohacking does not entail going against your own nature; on the contrary, it involves re-aligning yourself with your nature (being healthy). I choose to engineer my experience. I do this to optimize cognitive performance and happiness and help others do the same.

But how do you reduce the probabilities of all of these risks and still reap the benefits of nootropics? Research every compound and experiment slowly. There’s no substitute for knowing the risks and how to mitigate them if you want to biohack safely.

This post is not a substitute for professional medical advice, diagnosis, or treatment.