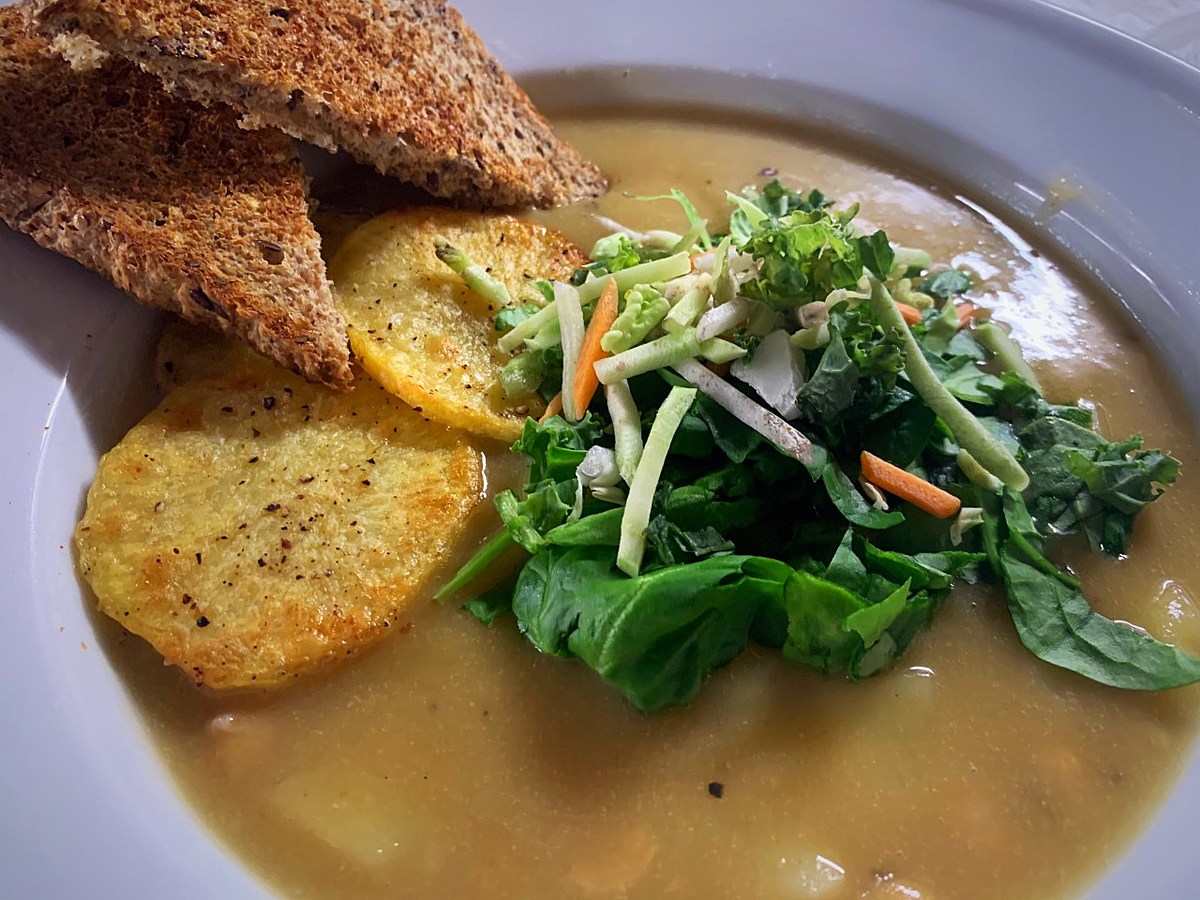 OK, so that title is misleading. I have many, many favorite soup recipes. I’ve always been a big soup fan. When everyone else was “sandwiching,” I was “souping.” However, since I’ve been on my uber-healthy kick and have been experimenting with recipes that are delicious and free of any added chemical oddities, this one has become one of my favorites. It’s primarily a combination of chickpeas and potatoes, and comes out creamy and quite flavorful, despite having no actual cream added.

Now, in full transparency, it’s not one of my own. It comes from one of my favorite cookbooks by Marco Borges called “The 22-Day Revolution Cookbook.” It’s the Chickpea Soup on page 138. I’ve tweaked a bit here and there and added a bit from time to time, but that’s from whence it came.

To add to that full transparency, this is a whole-foods-plant-based cookbook. So, if you’re keto, it won’t fly with you. I subscribe to more of a starch-heavy, veg-heavy, lower fat plan. Despite years of low-carb adventures, this is the only sustainable, life-changing diet I’ve ever experienced–both in my blood work numbers and in regard to weight loss. OK… onward.

This takes about 10 minutes to prep, 25 minutes to cook, and makes around 6 servings. Right on. If you have a high-powered blender, it will make this so much easier. Get one, they’re worth the cost.

4 to 6 Yukon (yellow) potatoes, peeled and cubed (russet works, too, but I prefer these.)

1. Add the broth and water to a large pot and bring to boiling.

2. Once boiling, add the peeled and cubed potatoes and halves of onion to pot.

3. Slowly stir in the salt, pepper, cumin, and garlic. Yum.

4. Bring heat down to a simmer and let cook for around 15 minutes, uncovered.

5. OK, this is the most complicated step, and it’s really not– transfer the two halves of onion and about half of the potatoes with some broth to your blender. Then add one of the cans of chickpeas and blend until magically smooth.

6. Return magically smooth mixture to the pot and add the other can of chickpeas.

7. Cook for around 5 to 10 more minutes, tasting and seasoning at will.

8. Ladle soup into bowls and pile on greens of your choice. I also highly recommend a piece of toasted Ezekiel bread for dipping.

I think you’ll find it’s even better the next day. It can be an appetizer, but I often just eat it as my meal. You know what else is crazy? A serving of the soup is only about 200 calories–add the bread and it’s still under 300.

Weight loss: Top tips to reset your diet and boost fat burn before Christmas – The Sun