Supercharge Your Brain : Principles of Safe Nootropic Use – Psychology Today 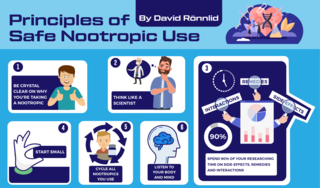 A nootropic is a substance that, if used properly, safely enhances the cognitive functions of the user.

To achieve peak cognitive performance and well-being, make sure to upgrade your sleep, exercise, nutrition, and mindfulness.

Be crystal clear on why you’re taking a nootropic

Be careful to use substances for your long-term goals and not only short-term mood-enhancing effects.

Individual nootropics have different functions and result in very different states of mind.

If you’re drowsy and need to learn or work, consider stimulant nootropics such as caffeine. If the caffeine makes you anxious, consume the anxiolytic L-theanine, which is very safe and generally considered synergistic with caffeine.

Your individual experiences, predispositions, and purposes are the locks to which you need to find the nootropic keys.

Every time you experiment with a new nootropic, decide beforehand which metrics will determine whether the substance did well for you. The less dependent on your own judgment the metric is, the better.

Write down your experiences and what to look out for next time, as you adjust your dose to find your personal sweet spot.

Reduce confounding factors; doing so is one example of a sound practice for scientific experimentation. Make sure to experiment with one substance at a time.

Stacking, in the context of nootropics, is using several compounds at once. This is exactly what I just told you not to do. I always try any substance that is new to me in small amounts and then once in the low range of what’s normal for the compound. But when I have ruled out probable danger for me personally, I find it useful to experiment with new compounds by “updating” my current use.

Because the goal is to always achieve the best results with the least (risk of) side effects, stacking should be reduced to as few compounds as possible. But in the initial phases of understanding the effects of a substance on your body and mind, you can combine it with complementary, synergistic compounds. These should be ones you already understand the effects of.

Though not necessary, knowing some neuroscience (mainly regarding neurotransmitters and hormones) before using nootropics will help you mitigate any side effects that may arise from nootropic use.

Let’s say phosphatidylserine makes it hard for you to fall asleep. You know that melatonin reduces sleep onset for people in general (there are two human placebo-controlled studies in which 681 participants received melatonin), and for you. You use .3mg and fall asleep within 15 minutes. Next time you know not to use phosphatidylserine so late in the day or in such high doses, but this time you saved yourself from sleep deprivation by applying the knowledge that the hormone melatonin reduces sleep onset latency.

Spend 90% of your research time on side effects, remedies, and interactions

For you to want to experiment with a nootropic, there is likely a positive benefit. Therefore, if you’ve identified the potential benefits, you don’t have to spend time reading more about how good the product or substance is.

Instead, identify every possible side effect to gauge whether it’s safe enough. Then try to understand which side effects are most common and what you could do to mitigate the damage if you start experiencing any of them.

Have a back-up plan. If you’re about to experiment with phosphatidylserine, what can happen? Oh, sleep problems. How to solve it? Melatonin.

Generally, there are few interactions between nootropics that are bad for you. Oftentimes, stacking nootropics provides for synergistic effects.

The one neurotransmitter system that comes to mind to treat with extra caution when stacking nootropics is that of serotonin. Combining SSRIs and MAOIs such as Escitalopram and Rhodiola Rosea can go very wrong. In the worst-case scenario, you can end up with serotonin syndrome, a potentially deadly condition. (To be safe, use an interaction checker.)

Generally, google “Nootropic Name interactions” and scout the first page for relevant info. Be extra cautious with compounds that are new to you or if you are already taking some pharmaceutical compounds.

If the nootropic you’re trying isn’t working as expected, stop using it. Don’t accept consistently re-occurring significant side effects without any meaningful rewards.

Nootropics should enhance your mind. While this probably comes with a greater sense of well-being and interesting experiences, they’re not for purely recreational use.

Most nootropics, though not all, are unlikely to cause addiction. I used to be addicted to gaming about three years ago, suggesting some degree of genetic predisposition or personality trait underlying an increased risk. But I have not been (subjectively) close to addiction to any nootropic for a year and a half since I started experimenting. On the contrary, since I started experimenting I’ve been feeling more in control of my actions than ever before.

The goal with nootropic dosing is to get the effect you want with the smallest possible dose, consistently and reliably. Start with a super-small dose to prevent adverse reactions specific to your individual genetic predispositions.

In order to get the best risk/reward ratio when consuming nootropics, don’t start with the dose recommended by any internet source. Cut it to at least one quarter of the suggested dose and then incrementally increase until the previous smaller dose gave better effects than the current higher dose iteration of experimentation.

Cycle all nootropics you use

Tolerance is a great metric for when you need to start going off the nootropic in question. Tolerance occurs when the body has adjusted to the presence of the foreign chemical; this can mean that the nootropic has done its thing.

Cycling also provides a good time for you to gauge the psychological effects that the nootropic in question has had while letting the neurochemical subsystems of your mind rest from that specific intervention.

There’s another reason why I cycle (almost) every compound: Chronic exposures of (almost) any kind are bad for the body.

The rule of thumb I use for cycling is that the safer the nootropic seems to be when I research the side effects of it, the longer I use it. My frequency of use of a nootropic is in direct relationship to the safety profile and level of evidence for it.

How long to use a compound before cycling off of it is different for each nootropic.

The smaller the dose you plan to consume, the less careful you have to be in cycling the compound in question.

Listen to your body and mind

This is crucial for experience engineering in general and understanding nootropic effects in particular.

Metacognitively assess the change in performance or perception that occurs as a result of changes to what you expose your body to. Know the limitations of subjectively measuring your own mental performance. For instance, your dopamine levels heavily affect your level of optimism and motivation, which could cloud your judgment.

If you feel like you failed with a nootropic, experience only the side effects or some psychological problem, don’t panic or make any decisions that will have lasting effects on your own or other people’s lives. Don’t spend too long in a state of mind; move on to nootropics and experiences that you’re familiar with and can find certainty in.

The purpose of nootropics is to enhance your cognitive abilities, including decision-making. However, even if you do everything right, you’ll probably find yourself at times slightly below your baseline prior to experimentation. Such states of mind can lead to beliefs that radical change is needed in your life. Let some time pass. Then, if you still believe you should make the change in your life, at least you didn’t let the compound do it for you.

When it comes to nootropic use, it is much more sustainable and useful to be safe than to be sorry.

If you have the right mindset for nootropics use (awareness of risks and how to avoid them), you’re in a great position to experience engineering success.

Note: Some of the biochemical mechanisms and processes are simplified for practical purposes.

To find a nootropic for your specific purpose(s), try the Nootralize app.

This post was originally published at nootralize.com. It is not a substitute for medical advice, diagnosis, or treatment.