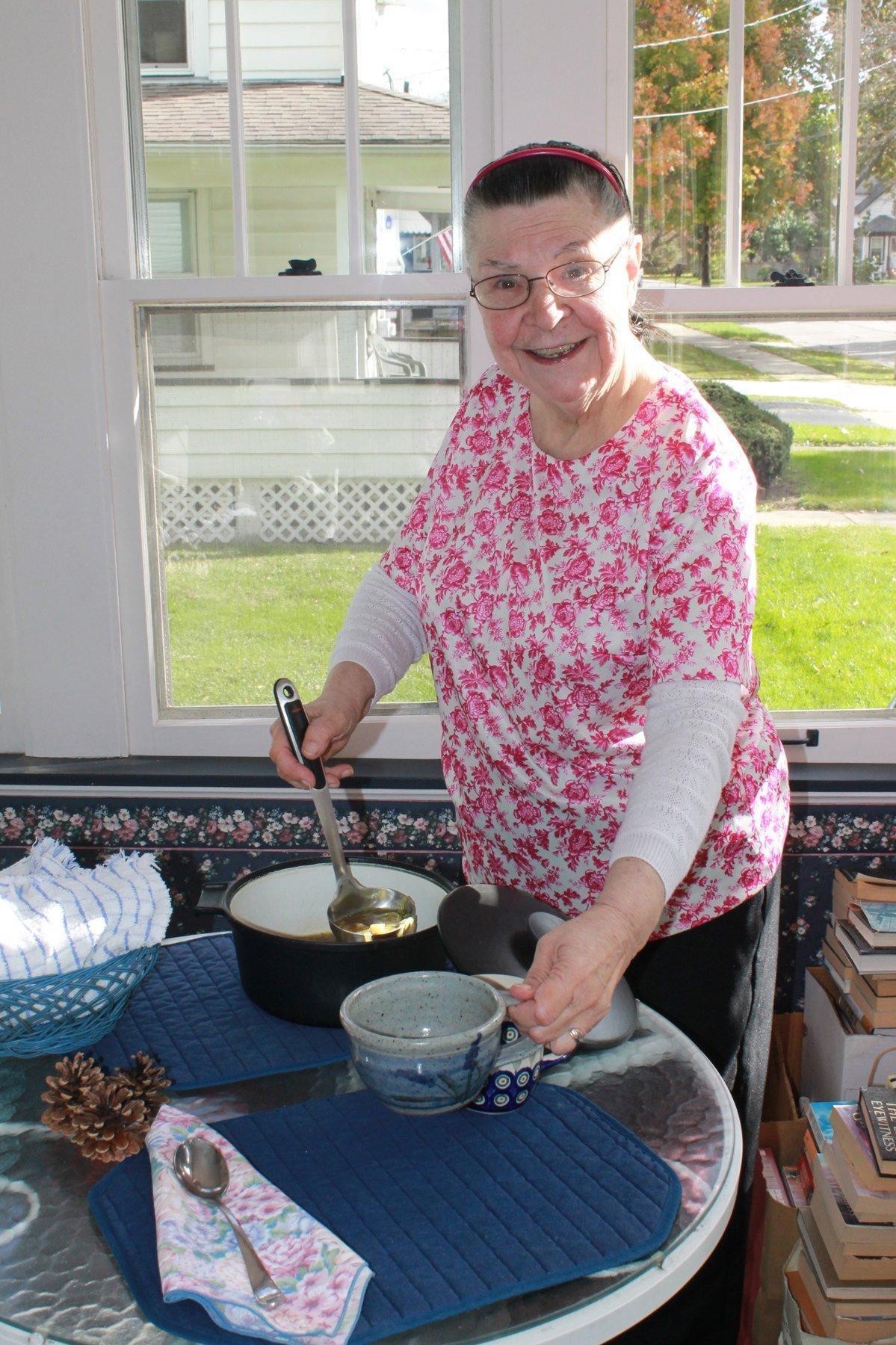 M. Grace Grzanek would like everyone to eat healthier.

“So many people don’t know how to cook,” said the 82-year-old Batavia resident. “They think that cooking takes too much time when you really can cook a very healthy meal in 15 minutes.”

She worries that fast food has replaced home-cooked meals in many homes.

“So that is one reason why we started the Just Food Initiative — to show people just how easy it is to cook good food,” she said, of the grassroots organization with a mission to build just and sustainable food systems so that everyone has access to healthy food. The group has undertaken programs for all ages on many aspects of food, from growing to preserving.

Grzanek believes that too often, people rely on the same old vegetable choices of carrots, corn or beans. She also is disappointed that the most common method of cooking vegetables is to cover them with water and boil them.

“There are so many different vegetables out there and great ways to prepare them,” she said. “I steamed kale and slivered onions yesterday. I drained it when it was done, put on a dollop of mayonnaise and sprinkled it with nutmeg. I didn’t need a recipe. I just made it and it was good.

“I hate the word ‘gourmet’ because it sounds snooty and expensive. Good food does not have to be gourmet. We are trying to teach people how to cook through seminars that are free or at a very low cost. A person shouldn’t need to have to pay $75 to learn how to steam kale and onions and put mayonnaise and nutmeg on it.”

Many people today readily admit that they don’t cook. “I think there is a feeling that cooking takes too much time or is beyond their abilities. But really, even children can make some of the recipes that we provide to people,” Grzanek said.

Another goal of the group is to encourage people to grow their own produce, even if it is just a few tomatoes in a garden box on the patio. She recommends using the Earth Box, a portable plastic container set up to accommodate growing vegetables that is easy to water and maintain.

The Just Food Initiative tries to work with other organizations to let the community know what is available to them. For example, Grzanek is a fan of seed saving.

“It is so easy to save seeds,” she said. “You can just put them on a napkin, let them dry and the next year, plant the seeds still on the napkin.”

When she learned about the seed-sharing program at St. Charles Public Library, she shared information aboutit with others. After leading a Just Food Initiative program at an Aurora elementary school where children grew plants in their classrooms, Grzanek helped them collect seeds to be donated to the seed library.

“The best part is that they filed the packets of seeds in the old card catalog drawers. Isn’t that great?” Grzanek said, laughing.

“I think that some people believe that growing your own food is just for poor people, but it is something everyone should do,” she said. “The best medicine ever is good food. It builds up the immune system. It is cheaper than drugs and tastes a lot better too.”

At this time of year, Grzanek likes to make steaming pots of soup that provide a warm comforting meal.

“I sometimes make my own stock, but you can buy it in the store to save time. Just look for organic products packaged in BPA-free containers,” she said. “Some recipes take 30 minutes or less to make and are so easy that a child could make them.”

One of her favorites is potato leek, using Yukon gold potatoes. She has also found that adding salt at the very end keeps it from being absorbed into the potato and altering the flavor. To make the soup more vegetable-rich, sliced carrots and celery can be added after the leeks are cooked. Here are her recipes for simple Potato Leek Soup and hearty Pasta E Faggiole with Tortellini.

For more information about the Just Food Initiative or their programs, call 630-470-8891.

Judy Buchenot is a freelance reporter for The Courier-News.

Bring both to a boil in a large saucepan. Add tortellini and cook until tender, about six minutes. Rinse and drain beans and add. Cut tomatoes in half and add. Cut basil into julienne strips and add. Reduce heat. Simmer, uncovered for five minutes. Add vinegar, garlic salt and black pepper. Heat through. Serve with cheese sprinkled on top of each bowl. Crusty Italian bread with extra virgin olive oil for dipping make a great side dish. Makes four servings

To prepare leek, remove any parts of the green leaves on top that are dry or brittle. Wash and peel. Slice white part of leek crosswise into 1/4-inch thick circles. Slice green top into ¼ inch wide strips. Peel garlic and thinly slice. Wash potato and cut into ½ inch cubes, leaving peeling on. Melt butter in a medium saucepan over low heat. Add olive oil. Turn heat to medium and add leek white and green parts and garlic. Saute until leek white parts are transparent but not brown — about 3 to 5 minutes. Add broth, potatoes, curry powder, white pepper and dill. Simmer over medium heat for 12 to 15 minutes or until potatoes are soft and tender. Add a dash of sherry and salt to taste. Serve with a sprig of fresh dill, if desired, and hearty bread like pumpernickel or beer bread. Makes two to three servings.

US sanctions Venice couple for false claims on nutritional supplements