Nourishing body, mind and the earth for healthy communities 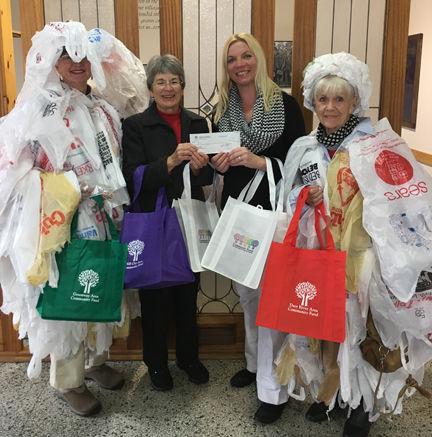 The Boys and Girls Club of Grand Rapids and Greenway, Earth Circle and Second Harvest North Central Food Bank were all provided grants through the Community Foundation to work with families, youth and the broader community to meet immediate needs and ensure a healthier future.

Over the next several weeks, the Grand Rapids Area Community Foundation is highlighting grants from the Annual Grant Cycle and some of the ways that giving has a real impact on our neighbors.

The Torch Leadership Program’s mission is to enable all young people, especially those who need us most, to reach their full potential as productive, caring, responsible citizens. The Torch Club develops junior leaders, providing an opportunity for middle school students in grades 5-8, to be involved in youth-led small group leadership and service activities. Torch Club members learn to lead and work together to implement activities in four areas: service to community, education, health and fitness and social recreation.

“At the heart of learning to work together is character and leadership development that gives young people a chance to lead and to act on their humanitarian ideals while building self-respect with strong attachments to family and community,” said Lori Kangas Olson, Area Director, Boys and Girls Club of Grand Rapids and Greenway.

The Torch Club gives youth confidence to pursue leadership roles outside of Boys & Girls Club and carry these traits and skills over into their adult lives. The program will be implemented at two Club sites, and Torch Club members will learn to elect officers and work together. Through service activities, Torch Club members identify Club and community needs, develop programs and activities, and actively participate in their own community sites. These activities also provide experience in the democratic process.

“Above all, they give young people a chance to contribute something of value to others,” said Kangas Olson.

Funded by the Peter Burich and Gloria Sella Burich Fund, and Kosak Family Fund, the Torch Club members, at the Grand Rapids and Greenway site, will meet an average of two days a week.

Earth Circle’s mission with the BYOBAG (Bring Your Own Bag) campaign is to promote concern for the earth and its inhabitants on growing pollution, climate change, and plastic’s ever increasing and never-ending, destructive presence.

The group, along with Hired Hands, is planning a special Earth Day 2018 community awareness event to demonstrate the amount of plastic used in Grand Rapids by setting bales of plastic in various areas of Grand Rapids.

“The heart of our program is to reduce the use of plastic bags and other plastic items,” said Pat Helmberger, Earth Circle. “We are ordering canvas bags from a local company and will distribute to shoppers who need them.”

Earth Circle will also teach more than 200 fifth graders about plastic pollution at the Water Legacy event in May. The program is being funded by the Fund for the Environment.

The Second Harvest North Central Food Bank is headquartered in Grand Rapids and serves Aitkin, Cass, Crow Wing, Itasca, Koochiching, Kanabec, and Mille Lacs counties. With a mission to engage the community to end hunger, the agency administers nine programs that distribute more than 4.3 million pounds of food and non-food products per year to low-income children, seniors, individuals with disabilities, struggling working families, and non-profit agencies that serve the needy.

During the 2017 Annual Grant Cycle, the Second Harvest North Central Food Bank received funding for three programs: supplemental funding for foods for people with hypertension and diabetes; Kids-Packs-to-Go Backpacks; and the mobile pantry.

There is an ongoing need to make certain types of food available for people with diseases such as high blood pressure and diabetes.

“We know from the Hunger in America Report that the population we serve face significant health challenges,” said Sue Estee, Executive Director of Second Harvest North Central Food Bank. “In over half of our client households, at least one member has high blood pressure, and 38 percent have diabetes.”

Some foods include rice, beans, whole grains, and other low sodium/high-fiber alternatives that are currently not available to Second Harvest through other sources such as food donated by retail grocery food rescue and local gardens. The grants from the Tom and Tina Karges Donor Advised Fund will be used specifically to purchase these types of food for distribution at the Food Bank.

Second Harvest’s Kids-Packs-to-Go Backpack Program provides nutritious foods that require little or no preparation to children who are at risk of hunger during long weekends and school vacations. The packs are distributed monthly at schools with high levels of children living in poverty in Itasca, Aitkin, Cass, and Crow Wing counties. Each pack contains three to five pounds of food and an age-appropriate handout about nutrition.

Because of high poverty and unemployment in the region, food insecurity is a significant issue. According to Feeding America, the food insecurity rate among children in the area was more than 18 percent (8,200 children) in 2015. In addition, many schools reported free-or-reduced-price-meal eligibility over 50 percent. Some schools reported as high as 80 percent. During the 2017-2018 school year, a total of 26,595 packs will be distributed to 2,955 children in 21 schools. In Itasca County specifically, 9,225 packs will be distributed to 1,025 children in 10 schools. By number of packs distributed, this represents a 10 percent increase in Itasca County, compared to the 2016-17 school year. Funding is being provided by the Edgar and Hannah Hetteen Fund.

Second Harvest’s Mobile Pantry provides healthy food in isolated, rural communities that aren’t large enough to support and sustain their own permanent food shelf. Specifically, each month, the mobile pantry delivers food to the communities of Inger and S. Lake. These two communities have a high degree of need, but few local resources, and also have high rates of disease such as hypertension and diabetes. (Check out the video taken just before Thanksgiving that shows the turkeys distributed through the Mobile Pantry.)

The mobile pantry serves approximately 150 households per month. Over the course of a year, nearly 80,000 pounds of food are distributed through the program. A grant from the Edgar and Hannah Hetteen Fund will be used specifically to purchase healthy food for distribution in Inger and S. Lake.

The Second Harvest North Central Food Bank has an endowment at the Community Foundation. Established in 2001, when the fund has grown large enough, the distributions could be used to sustain programs such as Kids-Packs-to-Go Backpack Program, or distribution to remote rural areas, or even help with basic operating expenses. Anyone can support Second Harvest’s endowment; whether through gifts of cash or in a planned gift through a will, the Community Foundation makes ending hunger an important part of our community.

Look for some fun and informational videos from the visit to Second Harvest Food Bank on the Community Foundation Facebook page and website at www.gracf.org

Goodbye, Afternoon Slump: These Hero Lunch Recipes Will Keep You Full Till Dinner

What supplements do scientists use, and why?