Feeling feebleminded? Take a smart pill. For more than 60 years, I thought smart pills were a joke, as in, “Darn! I forgot to take my smart pills today.”

Only lately did I realize there are — purportedly — such things. In polite company, they are called “cognitive enhancers” or “neuroenhancement” medicines. There is another word for them: nootropics. College students gulp them before an exam. Executives take them before a meeting that will be a snoozer.

Physicians and regulators are wary of them. Some universities try to ban them. Smart pills apparently have salutary effects for people with Alzheimer’s disease or narcolepsy or for young people with attention deficit hyperactivity disorder. But the American Medical Association says that nootropics, which “include a variety of prescription drugs, supplements, or other substances,” should not be used for “otherwise healthy individuals.” So-called smart pills carry risks, but “they do not make people smarter.”

Says sciencebasedmedicine.org, a watchdog organization, “Nootropics are an emerging class of drugs… which are used for enhancement of memory and cognition, sexual performance, athletic performance or musculature.… [They] are being abused and hyped without adequate evidence.” Importantly, they are sold over the internet “without adequate regulation.” 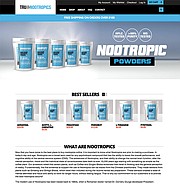 And now we come to San Diego. Until its original website was taken down after the Reader began looking into the company, TruNootropics claimed that it was “the best place to buy nootropics online.” The company boasted, “Based out of San Diego, California, TruNootropics is the top-rated supplier of highest quality nootropics” and “a leader in nootropic research. We only carry the highest quality powders that have passed rigorous testing.” Among the products it claimed to sell were Oxiracetam, Noopept, Aniracetam, Adrafinil, Piracetam, Phenibut, and Pyritinol. “Our shipping center is located in beautiful San Diego, California.”

Until the Reader began snooping around, the California secretary of state listed Trusciences, Inc., as an Irvine company with Adi Mangafic as chief executive and Joseph Fronke as chief financial officer. I reached Fronke at his Orange County home. He and Mangafic went to high school together and later briefly shared a room. Fronke once lived on Reflection Drive. “I have nothing to do with that company,” says Fronke. “[Mangafic] used my name without my permission.… He had bad credit and wanted me to cosign [a financial document]. Apparently he used my name. He never sold a dime…not one single thing.… He told me TruSciences was a nothing.” Fronke says he called the secretary of state’s office to get his name off the listing. TruSciences is now listed with the state secretary of state as a California company with Mangafic as its agent for service of processing.

I briefly reached Mangafic, who also lives in Orange County. “TruSciences, Inc., should be dissolved. We never started the business. It was a venture we were going to do but never got into it. The website never went live.” That’s odd, because I easily found it and wondered about its many boasts about being the top supplier.

Fronke says that Mangafic and two others are now deeply involved in a company with the elegant appellation of Kratomystic Premium Ethnobotanicals. That company, too, has stated on a website that it is based in San Diego — 6549 Mission Gorge Road #253. That address belongs to a Postal Annex mail drop, which, of course, won’t talk about any of its customers.

Kratomystic, too, is full of itself: “[W]e are known to be the leading provider of ethnobotanical herb[s], serving our clients with a variety of premium strains and extracts,” it brags. “We offer the best products in the market, which have passed top-notch quality assurance tests to ensure that clients get the best. Our service is impeccable, we believe in timely delivery, professionalism, research, competitive pricing, and exceeding our customer expectation is our top priority. We have become one of the most preferred choices for botanical research.”

Wow! Kratomystic executives must take their own smart pills.

This company says it is in the kratom business. Kratom is a tropical evergreen tree native to Southeast Asia. The Drug Enforcement Administration website says kratom “has stimulant effects in low doses and sedative effects in high doses.” To me, that suggests it makes you smart if you take a little bit but makes you dumb if you take too much. The drug administration warns, “It can lead to psychotic symptoms, and psychological and physiological dependence.”

In early 2016, the Food and Drug Administration announced that federal marshals at the agency’s request had seized 90,000 bottles of dietary supplements containing kratom. “We have identified kratom as a botanical substance that could pose a risk to public health,” said the agency. The Drug Enforcement Administration, citing “an imminent hazard to public safety,” began to ban it late last year. It was cited as a substance with “no currently accepted medical use and a high potential for abuse.” It was put on a Schedule I list along with heroin, LSD, and ecstasy.

But kratom supporters rallied in front of the White House, and 142,000 people signed a petition asking the federal government to change its mind. Backers argued that kratom can help those addicted to opioids recover. The American Kratom Association argued that the substance, which it calls no more harmful than coffee, can excel in “management of minor pain” and promotion of “a sense of health and well-being.”

Kratomystic is not listed with the California secretary of state. Mangafic says the company sells “herbal powders, aromas,” but that is a euphemistic description of a company allegedly selling kratom-based products with names like Borneo White, Green Malaysian, Maeng Da, Red Bali, and Ultra Enhanced Indo. “We don’t conduct business in San Diego,” he says, but that is not surprising, because San Diego bans kratom. Mangafic said he would have his lawyer call me and hurried off the phone. The lawyer didn’t call. I emailed Mangafic and phoned Fronke twice and asked him to have Mangafic call me. That was to no avail.

The Los Angeles and San Diego offices of the Drug Enforcement Administration have nothing they can say about Mangafic, Fronke, TruSciences, TruNootropics, or Kratomystic. In late September, the Food and Drug Administration, along with international regulators working through Interpol, sent warning letters to 400 websites in search of rogue online outfits selling dangerous drugs. These so-called San Diego companies weren’t on the list.

Program on healthy recipes and special diet modifications for the holidays