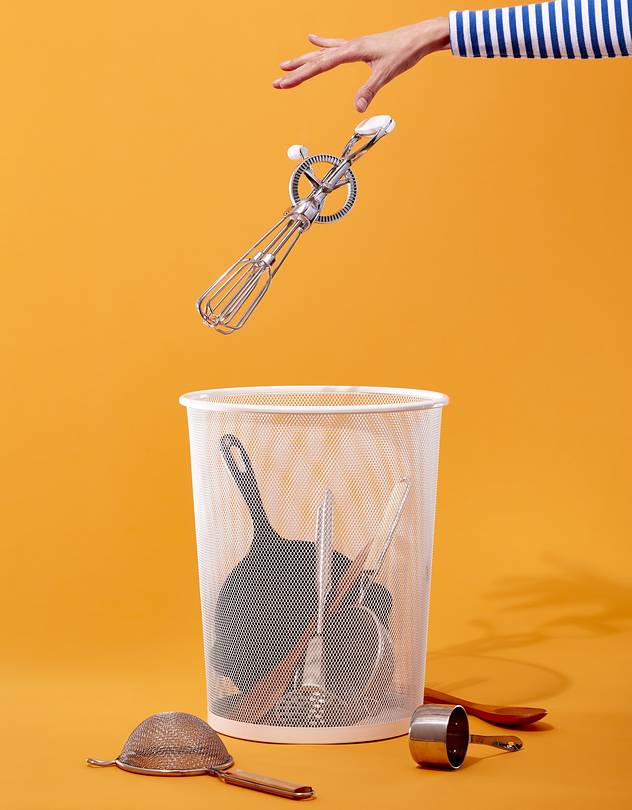 Go ahead and skip the mixing, measuring and sautéing. Opt instead for a healthy shepherd’s pie or pad Thai, entirely prep-free, from one of the fresh-delivery services below.

YOU DON’T have to cook.

There, I said it. The earth did not swallow me up. I have not been tarred as a bad mother, bad wife or lazy food writer. (At least not yet.)

The permission to not cook shouldn’t be radical in 2019. But it is. In the 21st century we’re admonished to cook like our great-grandmothers or risk falling victim to the evils of processed foods, which make us fat, give us heart disease and diabetes, and fuel climate change thanks to their reliance on commodity corn and soy.

The age-old idea that home cooking is the best, and perhaps the only, way for anyone to eat healthfully got a powerful signal boost in the first decade of this century from the author Michael Pollan, notably in his books “The Omnivore’s Dilemma” and “In Defense of Food.” Back then there was a lot of truth in it, but that’s no longer entirely the case. Yes, junk food is still out there, plentiful and cheap. But in response to consumer demand, a growing number of options—from prepared foods to delivery—are making it possible to eat healthy without cooking every meal from scratch. 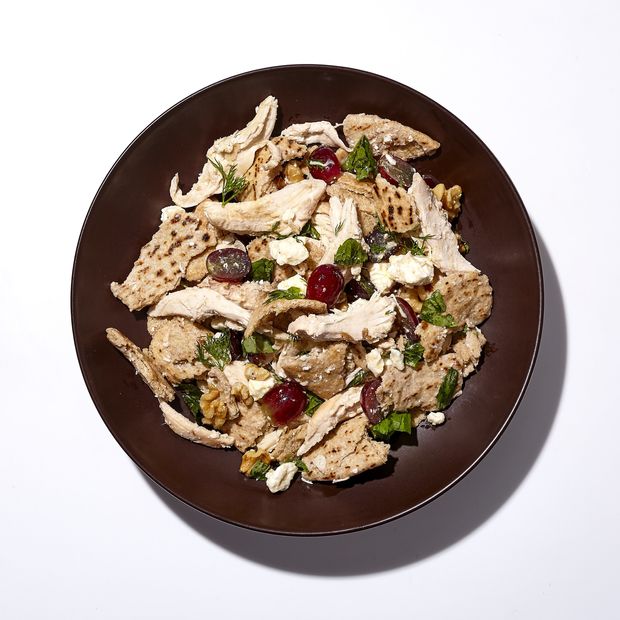 Toast 5 pieces of pita bread and tear into jagged pieces. Place in a bowl with ½ cup toasted walnuts, ¾ cup of feta, 1 generous cup red grapes and big handfuls of herbs such as basil, mint and dill. Tear meat from 1 rotisserie chicken and add to bowl. Dress with red-wine vinaigrette.

You’re relieved, right? So am I, though, admittedly, I have every advantage when it comes to cooking. For one, I actually like to cook. There’s nothing I’d rather do than go to a farmers’ market or cook an elaborate meal for friends. And I know how to cook, having attended culinary school. Crucially, I can afford to buy wholesome ingredients. But I also have a job and a young daughter, and I occasionally aspire to have a social life, too. All of which makes feeding my family every night a challenge.

The truth is, throughout history people have found ways to avoid cooking—if they had the resources to. From the founding of the republic through the early years of the 20th century, enslaved people and servants put dinner on the table for middle-class and wealthy families. After World War II, a slew of technologies developed for the military found new uses in home kitchens, and millions of Americans from a range of social classes embraced everything from frozen vegetables and TV dinners to microwaves and crockpots. Anything for some relief from the slog of everyday cooking.

Along with the conveniences, though, came guilt and judgment. Today, everyone—moms, dads, single people—feels pressure to prepare and eat healthy food. But research confirms that women, overwhelmingly, do most of the cooking—and are most expected to cook. A study, published in March in the journal Agriculture and Human Values, found that Americans judged mothers, but not fathers, on whether their family’s food choices were healthy—despite the fact that 64% of women with children under 6 work outside the home, and 70% of those work full time. “[It’s] still not okay to go get the packaged family meal, even at Whole Foods. It’s seen as a shortcut, not prioritizing your family enough to get into the kitchen and make things from scratch,” said sociologist Joslyn Brenton, co-author of the new book “Pressure Cooker: Why Home Cooking Won’t Solve Our Problems and What We Can Do About It.”

The good news: Fresh, healthy food is increasingly available with little or no assembly required.

The market has spoken, said David Portalatin, a food consumption analyst at research firm NPD. Values have shifted from fast and cheap to fast, cheap and fresh. Millennials, many of whom face crushing student debt and entered the job market in the wake of the Great Recession, don’t eat out quite as much as the Boomers, Mr. Portalatin explained, but “that doesn’t mean they know how to cook or like to do it.” Indeed, according to a 2017 NPD report, among the most popular meals prepared at home are cold cereal, toaster pastries, yogurt and tap water. Half of all dinners need to be prepared in 30 minutes or less. “They want the same level of convenience, but access to it in the home,” said Mr. Portalatin. 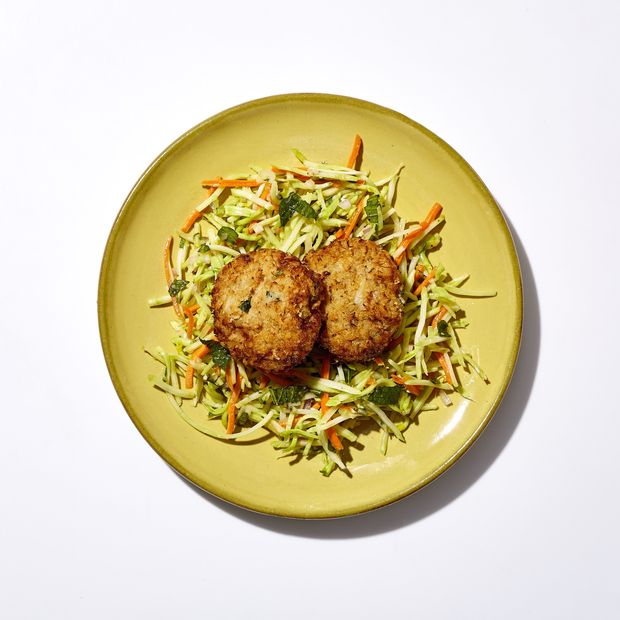 Meal kits were an early attempt to answer this need. These subscription boxes of pre-measured ingredients produced healthy meals and saved time on planning and shopping. But they still required significant cooking—anywhere between 30 minutes and an hour of prep time for dishes such as quinoa tabbouleh with fairy-tale eggplants. And because the services required a subscription, subscribers had to decide what to eat for dinner a week or more in advance, a commitment many proved unwilling to make: According to the Chicago research firm Food Genius, as many as 80% of Americans don’t make plans for dinner until at least 4 p.m. the same day. Services that once seemed like the saviors of home cooking crashed, hard: Blue Apron, one of the early meal-kit pioneers, has lost more than 90% of its value since its 2017 IPO, making it one of the worst public offerings of the decade.

The next generation of kits try to solve for these issues. Meal kits from the company Plated are now in Albertsons and Safeway stores, while the kits from

can be purchased at Giant Food and Stop and Shop. Shoppers can grab one on the way home rather than commit in advance. And if even that’s too much trouble,

“
‘Fresh, healthy food is increasingly available with little or no assembly required.’
”

These all-but-no-cook meals are where things are heading. Mosaic, founded by former Blue Apron employees, delivers vegetable-heavy bowls similar to what you find at fast-casual joints. Flash-frozen, the bowls are designed to upend common notions of frozen dinners as bland and loaded with processed ingredients. Mosaic’s offerings are fresh, with a modern combination of flavors, though they still suffer from cooking in a microwave. (The broccoli and the tofu in my peanut-tofu bowl were soggier than I would have liked.)

Instant Pot and Crock-Pot devotees, meanwhile, can order meals that arrive fresh or frozen in a bag. All you do is empty the contents into your appliance and push the on button. (See “Two Ways to Not Cook Now,” at right.)

This is only the beginning, said Michael Schaefer, a food and beverage analyst at Euromonitor International. In many ways, America lags behind other countries in delivering fresh, on-demand meals. In Japan, convenience chains including the country’s largest, 7-Eleven, offer far more than a wan plastic package of carrots and hummus for customers seeking wholesome food. One quarter of all ready-to-eat food transactions occur in the country’s 73,000 convenience stores. Consumers choose from freshly made rice balls, yakitori (grilled chicken skewers) and bento boxes delivered to stores several times a day. 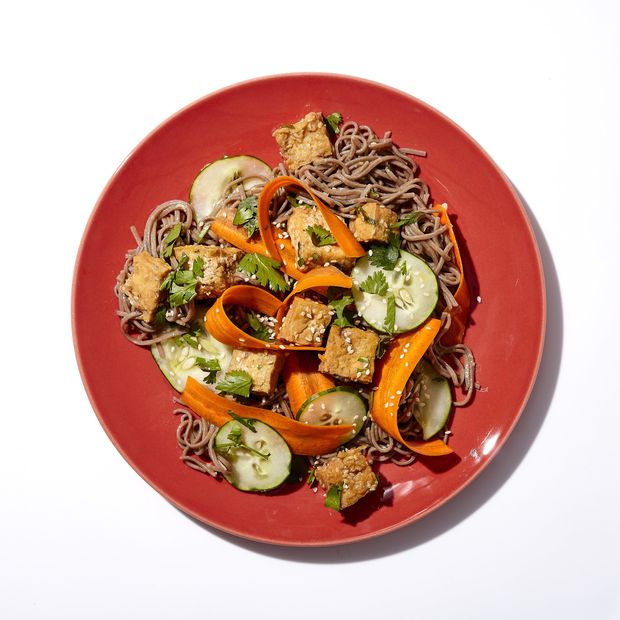 Make marinade: Combine 2 tablespoons each orange juice and sesame oil with 1 tablespoon rice vinegar, ¼ teaspoon grated garlic and 1/2 teaspoon grated ginger. Whisk well and season with salt to taste. Cook 1 (10-ounce) package soba noodles according to instructions. Drain and toss with marinade. Let cool to room temperature. Top with store-bought marinated, fried tofu (such as the kind at the Whole Foods hot bar), carrot ribbons, sliced cucumbers, chopped cilantro and, if you have them, a sprinkle of sesame seeds.

Meanwhile, in China, internet giant Alibaba has opened Hema, a 100-strong chain of ultramodern grocery stores that serve as both retail outlets and warehouse and distribution centers. You can visit a store to dine in the restaurant (served by robot waiters), select fresh seafood (something that’s very important to Chinese customers) or simply shop by app and have your groceries delivered within 30 minutes—letting customers decide what to eat at the last minute but with enough time for quick prep. “What we see is that supermarkets, or what we thought of as supermarkets, will offer ingredients or complete dinners,” Mr. Schaefer said. “Whatever form of cooking—or not cooking—you want to do, it is going to be personalized to meet that need.”

Still, these services aren’t cheap. Until healthy no-cook solutions make their way to the Walmarts and Dollar Generals of the world, access is limited to middle-class and wealthy families. In “Pressure Cooker,” Ms. Brenton and her co-authors argue that government will need to step in to help make the healthy choice the easy and affordable one for everyone.

That may take time. But the fact that there finally are ways to eat well at home without cooking is welcome progress. I’m still going to cook when I can, and when it’s enjoyable. But I’m not going to feel guilty when I don’t. And neither should you.

Two Ways to Not Cook Now

Choose traditional meat-and-veg meals, such as chicken parm and steak au poivre, or low-carb, low-calorie, vegetarian and Paleo options—all microwavable. Order four, six, nine or 12 meals a week at $50-108, for delivery nationwide. Pause or cancel any time before the weekly cutoff. get.freshly.com

This service emphasizes “clean eating,” delivering plant-based ready-to-eat meals for breakfast, lunch and/or dinner, nationwide. A full service might start the day with coconut-yogurt pudding with seasonal fruit followed by a lunch of seasonal vegetables, brown rice and avocado-tahini sauce and a dinner of eggplant Florentine with broccolini. Choose from three- or five-day-a-week programs. Dinner-only plans start at $95 per week.sakara.com

Promising “Frozen done fresh,” the bowls, many vegetarian and dairy free, include tofu and broccoli over farro and beets and goat cheese over wheatberries. Choose between four and 12 meals per week and how often you want delivery. Prices start at $12 a bowl and decrease for larger orders. Mosaic delivers in a 1-day radius of New York’s Hudson Valley, including New York, Philadelphia, and Washington, D.C. mosaicfoods.com

Meat and veg share the plate in Omaha’s skillet- and crock-pot-ready meals, which ship nationwide. Buy meals, such as shrimp scampi or French chicken-and-sausage stew, individually or in bundles of four or seven. Dishes for two start at $15. No subscription necessary, though a minimum order is required. omahasteaks.com

Currently delivering in the Denver area, this startup offers bi-monthly delivery of frozen meals ready for the slow cooker. Made-from-scratch dishes, flash frozen, serve four to six. All meat is from local farms and pastured or free-range, and vegetables are local when possible. No subscriptions—simply order by the cut-off time. Prices per dish start at $24 and serve four to six. realfoodready.com

Available in Vancouver and Calgary, Canada, Presto lets customers order with no subscription. Meals, made for two include tarragon risotto with salmon and chicken biryani. They arrive on weekends, by courier to minimize packaging; customers pick a window to be home to receive delivery. Meals start at $20 Canadian and feed two. prestoeats.com