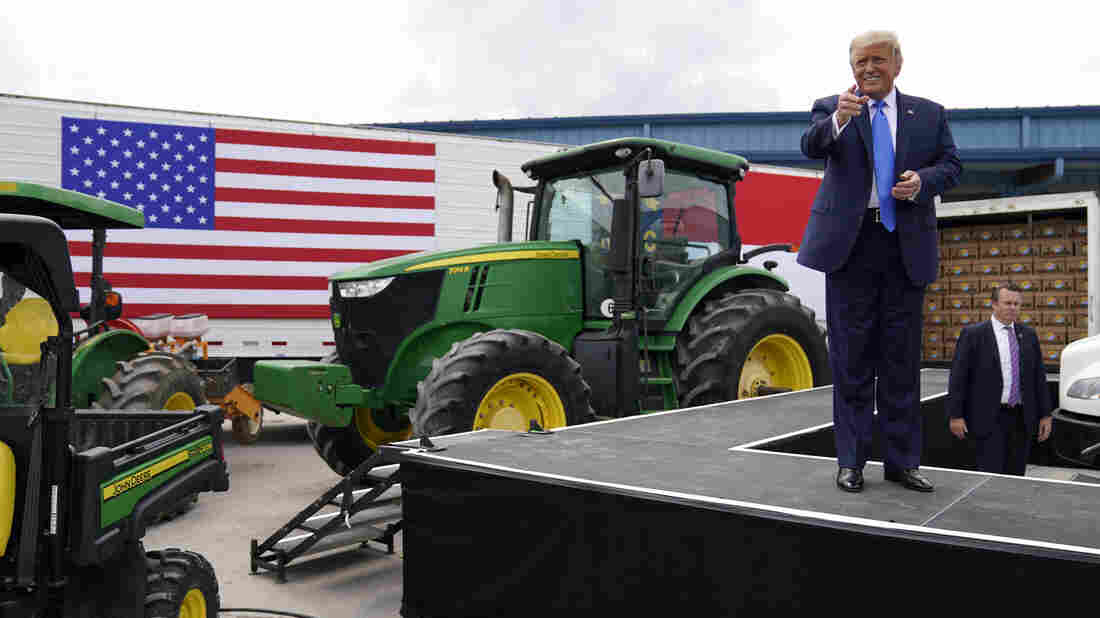 The Trump administration has been celebrating an initiative that buys food from farmers and distributes it through charitable organizations such as food banks. “I’m proud to announce that we will provide an additional $1 billion to fund the Farmers to Families Food Box program. It’s worked out so well,” President Trump told a cheering crowd on Aug. 24 in North Carolina.

Yet food banks, which play a key role in the program, are ambivalent about it. On the one hand, they’re grateful for the food. “Any family that’s receiving one of these food boxes is blessed and nourished, and I think it’s a good thing,” said Eric Cooper, president and CEO of the San Antonio Food Bank.

But Cooper and other food bank managers also said that the money for the program could have been spent more effectively and delivered two or three times more food to people who need it.

The food box program was launched in the spring when restaurants, schools and company cafeterias shut down and farmers who supplied them suddenly had no place to sell their crops. Some farmers ended up destroying perfectly good food.

Secretary of Agriculture Sonny Perdue told the crowd at last week’s event in North Carolina that he got a call from the White House. “The president said, ‘What’s all this food being destroyed? Milk being dumped? Vegetables being plowed under?’ “

It was especially disturbing because at that same time, food banks were overwhelmed by a surge of people who had lost their jobs and needed help getting enough food to eat.

In response, the U.S. Department of Agriculture launched its $3 billion (now $4 billion) food box initiative. Notably, it is run by the department’s Agricultural Marketing Service, which helps farmers sell their products, rather than the USDA’s Food and Nutrition Service, which administers food aid programs.

The USDA awarded contracts to dozens of companies that promised to buy fresh vegetables, milk and meat, package the food, and get it to people who need it by delivering it through nonprofit organizations, mainly food banks. The USDA announced on Friday that contractors have delivered 75 million boxes so far.

According to Brian Rose, CEO of Flavor 1st Growers and Packers, the vegetable cooperative that hosted the president’s visit last week, “This has been a huge help to our family farms, and has allowed them to operate through this pandemic. Most importantly, this program has provided fresh, healthy food to Americans in this time of need.”

Yet the program, according to several people involved in it, was not designed to deliver food efficiently to people who need it most.

First of all, the government paid high prices for the food. “Across the board, I think there were premium prices paid for all of those boxes,” the San Antonio Food Bank’s Cooper said. “Some of these food boxes, they were $40, $50, $60 for what you’d get at a grocery store for about $20.”

The USDA paid generously, in part, because it wanted those companies to take on the job of distributing the boxes as well. The plan was called “truck-to-trunk.” The companies were supposed to take their food boxes directly to local food bank distribution points and drop the boxes into the trunks of waiting cars. During the pandemic, many food banks have been running short of volunteers to do this job.

But many food banks, including Cooper’s, said that food box contractors refused to do it. Some of them didn’t even have the refrigerated truck required to do the job.

“The contractors that bid on [the food box contracts] either didn’t know what they were getting into or never intended to fully execute that vision,” Cooper said. He said his food box contractor and others were only willing to drop off truckloads of boxes at food bank warehouses. Cooper said he tried to negotiate with the companies, to get them to pay some distribution costs, but was unsuccessful. “The contractors just said, ‘Do you want the food or not?’ and we desperately needed the food,” he said. “So we just said, ‘We’ll cover the expenses.’ “

He didn’t have much leverage, because the USDA’s contractors can send their food almost anywhere in the region, not necessarily to places that need it most. “If [they] could find a willing nonprofit to take it, then the contractors were paid,” Cooper said.

As a result, he said, some parts of the country got a lot of food, while others got very little.

The USDA is now making some changes in the food box program, laying out rules intended to ensure that contractors help cover the cost of distributing the food.

The supply chain crisis of last spring has now passed. Farmers aren’t dumping loads of milk or destroying harvest-ready fields anymore. Some have found new buyers such as grocery stores. Others have reduced production. Many still want the USDA to continue to step in and buy some of their crops.

But some Democratic members of Congress have turned against food boxes altogether. Rep. James Clyburn, D-S.C., recently announced that the Select Subcommittee on the Coronavirus Crisis will investigate mismanagement in the program. At a hearing on food boxes in July, Rep. Marcia Fudge, D-Ohio, complained that the USDA couldn’t answer basic questions about it.

“Who’s getting the food? Are they giving [recipients] rotten food, which is what I’m hearing in some of these instances. We have none of these answers,” Fudge said. “This is fraught with waste, fraud and abuse.”

There’s a better way to do this, she said: Expand SNAP — the Supplemental Nutrition Assistance Program — which delivers benefits electronically and allows people to buy the food they need at grocery stores. Most independent observers agree that this is a much more efficient mechanism for delivering food aid.