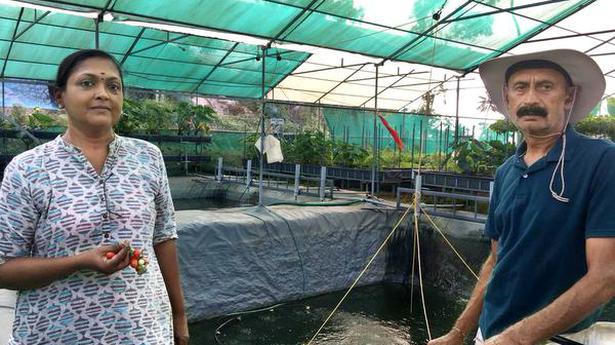 You do not usually find blue-tinted chilly and diabetic tapioca among local produce, but then the Pandayam farm is more of a curated enterprise with an amazing variety of vegetables and fruits.

Exotic variants of custard apple, rare breeds of snake gourd, 20 types of chilly and a range of micro-greens and winter vegetables are among the crops that grab your attention at the farm near Valakam. And for Somasekharan Nair and Sunitha Nair, the retired couple living in their little cottage in the 4.5-acre farm surrounded by rubber plantations, it is all about setting an example of sustainable living.

“We both love farming, but it’s not a business-oriented initiative as all we wanted was to cultivate organic produce that is safe to consume. We don’t entertain wholesale dealers, but prefer people who buy vegetable and fish for their kitchen. We use only organic manure and stay away even from bone meal. We pluck all vegetables apart from okra and tomato in front of the customers only,” says the 64-year-old Mr. Nair, who started the farm four years ago when he retired from a renowned insurance firm in Bahrain.

Though the couple started preparing the land four years ago, they recently switched to aquaponics that integrates fish farming and vegetable cultivation. Mr. Nair says he did a lot of research on the subject before setting up ponds in the farm with recirculating aquaculture system (RAS).

“Aquaponics has its own challenges and it’s something that requires constant attention. That is why we built a cottage in the farm and shifted from our home. Every morning I join the workers at 6.30 a.m. as you can’t run such a farm without complete involvement.”

“There is this variety of banana that is seen only in villages but has a very typical taste and flavour. It’s not easy to source the seedlings from any other place, so we go on this shopping trips very often to collect exotic varieties. During the last harvest we had this deep-maroon okra which is very uncommon here. People have seen the red variant but maroon was a novelty and so many customers wanted its seeds. And then we had this tasty dwarf snake gourd and sweet chilly that we replanted this season as well due to the demand,” she says.

Apart from the steady local clientèle, the produce from the Pandayam farm reaches its customers through a string of social networking groups.

“The yield is really good, but what makes it a fulfilling experience is the fact that we are able to supply chemical-free produce for many families. Also it’s an attempt from our part to promote organic farming,” says Mr.Nair.

4 recipes that could help you live longer – TODAY

Boost your immune system with these power spice recipes – GMA