Published in partnership with the USC Price Center for Social Innovation in support of the Neighborhood Data for Social Change platform (NDSC): The platform is a free, publicly available online data resource that provides reliable, aggregated data at the city, neighborhood, and census tract level. The mission of the USC Price Center for Social Innovation is to develop ideas and illuminate strategies to improve the quality of life for people in low-income urban communities.

Childhood obesity rates have tripled in the United States since the 1970s, putting a large portion of our nation’s children at risk for future chronic health conditions. Nationally 17% of children ages 2-19 years old are obese, up from 14% in 2000. These kids are at greater risk for heart disease, hypertension, type 2 diabetes, stroke, cancer, asthma, and osteoarthritis — both during their childhood years and throughout their adult life (Segal et al., 2016).

Below is an interactive map showing the percentage of 5th-grade students in the high-risk/needs improvement category by neighborhood across Los Angeles County.  Hover over your neighborhood or use the search box to see student health outcomes in your area. 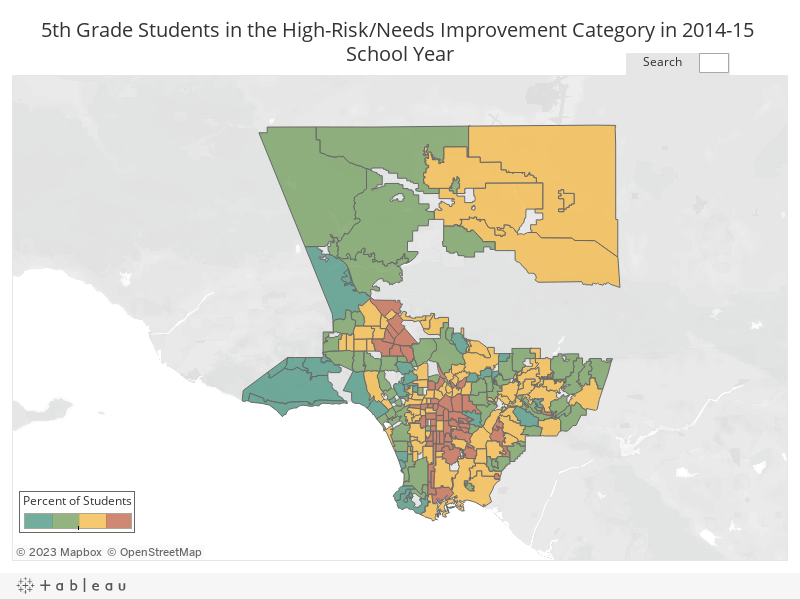 Across Los Angeles County, 24% of 5th-grade students tested in the high-risk/needs improvement category of the Healthy Fitness Zone in the 2014-15 school year. Said another way, almost one-quarter of 5th graders in Los Angeles County do not have sufficient fitness needed for good health (California Department of Education, 2015). The health indicators are far worse for children in low-income communities. One of these communities is Watts, where census tracts tied to public housing developments report especially poor health outcomes for both 5th and 9th-grade students. In the census tract containing the Nickerson Gardens housing development — the largest public housing complex west of the Mississippi — less than half of 5th-grade students tested within the Healthy Fitness Zone, and 31% were identified in the high-risk/needs improvement category (California Department of Education, 2015). The median household income in the Nickerson Gardens neighborhood is $12,984 — less than one-quarter of the median income for Los Angeles County (American Community Survey, Table B19013, 2011-15).

Similarly, in the census tract containing the Jordan Downs housing development in Watts, where the median household income is $14,025, only 46% of ninth grade students passed their fitness test and 30% were identified as high-risk/needs improvement (American Community Survey, Table B19013, 2011-15 & California Department of Education, 2015).

For children living in low-income neighborhoods like Watts, opportunities for safe outdoor exercise are few and far between, making it difficult to incorporate much needed physical activity into their daily habits. While most neighborhoods have access to parks and recreational space, the areas are often unsafe to play in — particularly at night. Further, due to the high number of gangs in the neighborhood, even simple physical activities like walking to school pose a threat of violence or harassment.

While physical activity plays a large role in overall health and fitness, proper nutrition is critical to the healthy development of children and teenagers. For many low-income communities, the persistent lack of access to local, healthy and affordable food leads to high rates of obesity and chronic illness among both children and adults.

Consider that in 2010, South Los Angeles had only 60 full-service grocery stores to serve approximately 1.3 million residents; the affluent West Los Angeles region had almost that same number of grocery stores to serve half the number of residents. In 2010, corner and convenience stores accounted for 94% of food retail outlets in South Los Angeles; these locations rarely offer fresh fruits and vegetables and often charger higher prices for other food items (Bassford et al., 2010).

Food insecurity in South Los Angeles has a severe impact on the future of children and teenagers in the region, who need key nutrients from healthy food to support their physical and psychological development.  In South Los Angeles, an alarming 43% of adults over the age of 25 had less than a high school education in 2015 (American Community Survey, Table B15002, 2011-15). We must consider the role that food insecurity has on the educational success of young adults in these neighborhoods. If a teenager lacks access to the food needed to sustain his healthy growth and development, how will he have the energy to pay attention in class, complete his homework, or show up on time to a part-time job?

This persistent combination of poor health, food insecurity, and lack of opportunity in low-income urban communities is the inspiration behind the new Watts restaurant Locol, launched in 2016 by famed chefs Roy Choi and Daniel Patterson. The restaurant offers a range of good quality, nutritious meals at fast food prices, while also providing jobs to the local community. The restaurant is one of the only places in Watts to buy a hot take-out meal without going to one of the many traditional fast food restaurants in the region. The FitnessGram Healthy Fitness Zone illuminates neighborhoods in Los Angeles County that need additional investments to support the health and fitness of our children. With additional data, we’ll be able to pinpoint new models and policy interventions that can support the healthy development of all children in the region, regardless of their zip code.

United States Census Bureau. B15002 : Sex by Educational Attainment for the Population 25 Years and Over. American Community Survey, 2011-2015.

Public Matters’ Market Makeover is a comprehensive strategy for addressing the “grocery gap” in “food deserts,” areas that have limited access to quality, healthy food; an overabundance of fast food; and alarmingly high rates of chronic conditions related to poor diet.