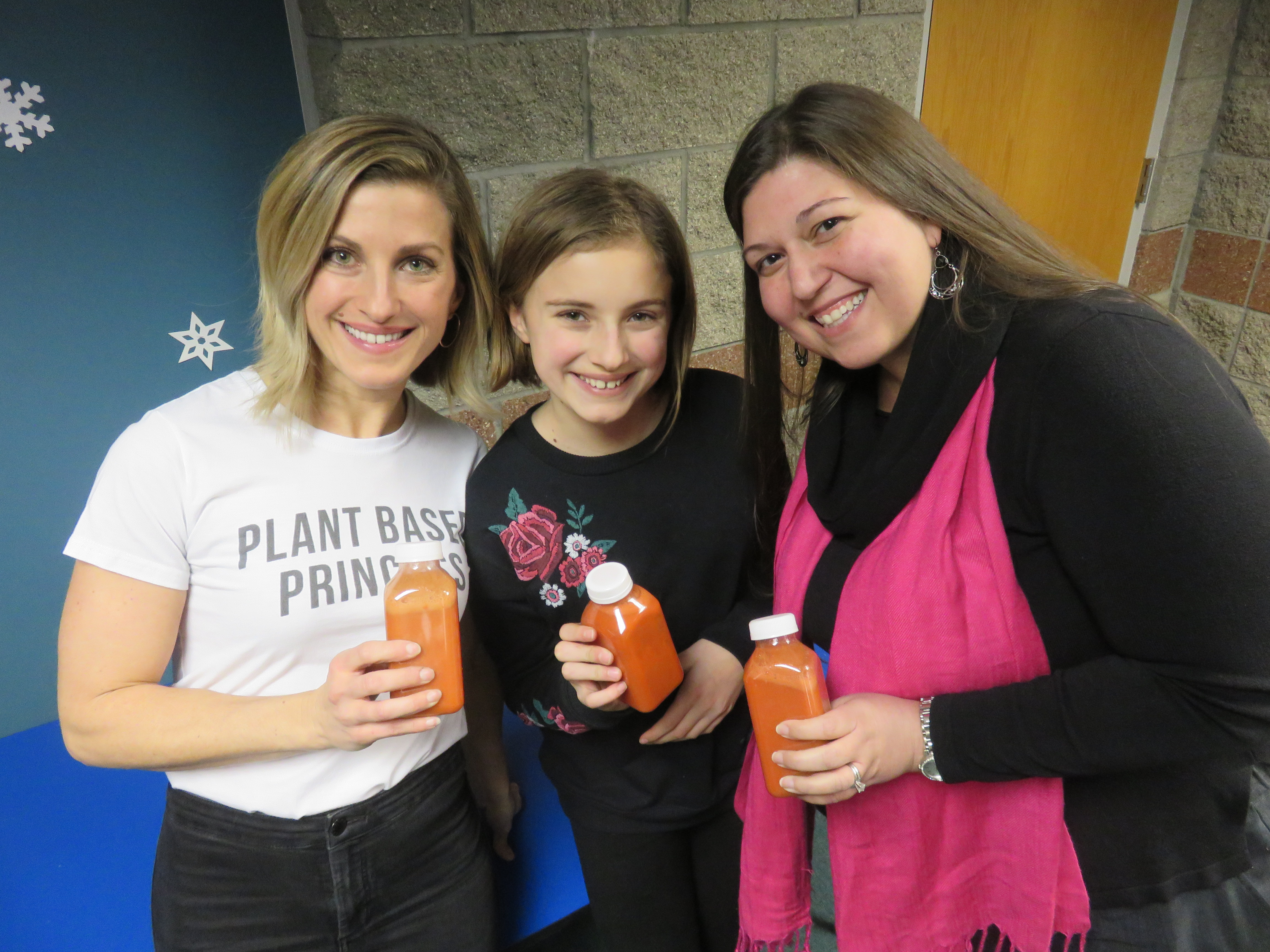 MEETING MOMENTS — The January meeting of the Ohio Valley Business and Professional Women included speaker Angela Lombardo, left, who provided a special juice and snack as part of her presentation on healthy eating. With Lombardo are her daughter, Layla, her inspiration for becoming interested in nutrition, and Sara Lane, BPW president.
— Janice Kiaski

STEUBENVILLE — The Ohio Valley Business and Professional Women will be announcing later this month the names of several local women who will be honored at the organization’s key fundraiser — the annual Wine and Shoe Extravaganza.

Specifics about the event to be held in March also will be announced in addition to the Woman of the Year nominees. Popular vote at the event determines the winner.

The fundraiser includes food and wine, a Chinese auction, a 50-50 drawing and the opportunity for attendees to cast their vote for the Woman of the Year award and to vote as well for the best shoes in three categories, including Best in Shoe.

Some discussion about the event was part of the BPW’s Jan. 16 meeting held at the Schiappa Branch of the Public Library of Steubenville and Jefferson County where President Sara Lane presided.

Angela Lombardo, a certified holistic health coach, prepared in advance the two as part of her program presentation on kicking off the new year with “a positive mindset and healthy food prep.”

Come summer she is looking forward to opening her business, Fresh Twist, on Sunset Boulevard where Legal Hair and Day Spa, her parents’ business, is located.

“I am really excited about that,” she told the club members. “The concept is a healthy place to eat, and I’m going to have salads, smoothies, juices and sandwiches.”

Lombardo explained her daughter Layla’s diagnosis was the springboard for nutrition becoming her second passion.

“Layla was diagnosed with some tumor activity on her vocal cords when she was 2, had nine surgeries between the ages of 2 and 8 (she’s 11 now) and in that five years was supposed to have surgery every six weeks to remove the tumors, but through our nutrition efforts and healthier lifestyles and holistic medicine, she has not had surgery for three and a half years now, so it’s quite a good story and what motivates me,” Lombardo said.

“That is why I am so passionate about it because we were not given other options for her treatment beside surgery or using very aggressive chemotherapy drugs,” she said. Lombardo began looking into how to slow down tumor growth with diet and started studying holistic medicine, including diet, environment and lifestyle, and ultimately earned certification to be a holistic health coach. The family switched to eating a plant-based diet.

“There’s a big difference between store-bought juice and what you’re drinking tonight,” Lombardo said, explaining that Dr. Max Gerson came up with the Gerson Therapy “for dealing with different diseases using a plant-based diet” and with the juice she prepared representative of his protocol.

“Granny Smith apples are a key ingredient in the Gerson Therapy because the malic acid is extremely beneficial, as it stimulates the metabolism and helps to detox heavy metals,” according to a handout she provided. “Sour apples are higher in potassium malate and higher in pectin. They also can extract higher amounts of nutrients from the pulped vegetables due to their higher acidity, so you end up with a more nutrient-rich juice.”

It’s best to drink such juices on an empty stomach for optimum nutrient absorption, according to Lombardo. Juicing involves the removal of fiber but with smoothies, “all the fiber is still there.”

The energy balls, meanwhile, are her healthy version of an Almond Joy. The recipe calls for walnuts, but she used pecans instead, because they are “extremely high in vitamins and minerals.”

She reminded the group that “food serves a purpose beyond making us feel full and tasting good — it is providing you fuel to get through the day, so you want to make sure you have good fuel.”

Other BPW meetings and events on the club agenda are: Feb. 20, author party at the Schiappa branch of the Public Library of Steubenville and Jefferson County; March, the annual wine and shoe extravaganza fundraiser, with the date, venue and honorees to be announced; April 17, speaker Trish Maple at The Inn at Brandywine, 786 twp. Road, 244, Toronto; and May 15, the scholarship awards banquet and officer installation at The Laurels of Steubenville, 500 Stanton Blvd., Steubenville.

The BPW state conference will be held May 18-20, which Lane said she plans to attend and hopes to recruit five members to also participate.

Building the local BPW membership — and retaining it — is a priority for the organization, Lane announced at the club’s kickoff meeting in September, noting she hopes to grow it from 20 to 35.

Membership is open to area women with dinner meetings held September through May at 6 p.m. on the third Tuesday of the month at various locations.

It connects its members with mentors, colleagues and friends for career networking and supports women through career transitions and at different levels of industry. Annual membership is $40. Contact Lane at SaraLaneBPW@yahoo.com for information. Aside from Lane, officers are Sarita Asawa, vice president; Marie-Helene Wilson, treasurer; and Mary Lou Jones, secretary.