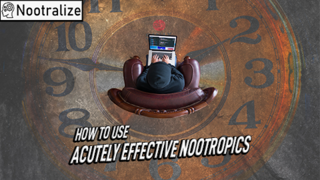 Many people say that they want to use a nootropic every day and then not have to think about it anymore. While this nootropic consumption tactic can be effective, it is not likely to be the best you can achieve with your supplementation regimen.

The two most common reasons to want to use only nootropics that have primarily chronic effects are:

“If the nootropic enhances cognitive performance in the short term, it’ll probably have negative effects in the long term.”

“I want to spend as little time as possible thinking about my nootropic use but still get the benefits.”

To start with, it is definitely not a scientific fact that enhancing cognitive performance in the short term has negative effects in the long term. Think of exercise: It has acute and chronic cognitive enhancement effects. There is no reason to believe that a pill should have the opposite effect. It is indeed true that certain compounds that some people use for cognitive enhancement, such as amphetamines [1], can have detrimental long-term effects. Cocoa, on the other hand, can have beneficial effects in the short and long term. [2]

The second argument, that they’d not like to spend time self-experimenting and instead blindly experiment without any improvement in their regimen over time, is also a faulty one. If you learn over time from your nootropic use, allow for the removal and addition of nootropics for short-term or long-term use, you’re likely to end up with much better cognitive performance in the long term. Having a strong baseline of cognitive performance is probably the most effective time-saving asset you can own.

Think of all the times you procrastinate on what you know you should do when you’re in a distracted state of mind. Just the removal of procrastination through attention and motivation enhancement will probably save you more time than you will spend experimenting with nootropics for acute cognitive enhancement effects.

Abstaining two weeks from Panax Ginseng or caffeine before the 300 mg use of any one of the compounds are methods of predictably achieving peak states of cognitive performance.

These are things that essentially everybody can do. And they will work for most people.

If you were to use caffeine or Panax Ginseng alternating Fridays (14 days between one dose of the same nootropic), you’d not have to spend much time on experimenting with your use, and it’d be very unlikely that you’d experience any long-term adverse effects. These compounds have centuries, if not millennia, of use demonstrating their safety when used in a responsible manner.

Let’s say your cognitive performance is improved one out of seven days of the week for the rest of your life, without any adverse effects, such as outlined in the Ginseng/caffeine strategy above. You’ve suddenly raised your average cognitive performance, and it wasn’t through the use of nootropics that primarily work after long-term use.

You have better control over acute effects

Subjective assessments of the effects of nootropics are currently the best and most practical way to determine whether a nootropic works for you. While we aim to make the objective measurement of cognitive performance easy and practical with the Nootralize web app, listening to signals your mind and body sends you is currently the most accurate way that’s also practical.

If you use a nootropic for its acute effects, you can get the benefits of it when you have the most need for those benefits. You can also decide not to use it when it may harm you.

For example, caffeine can enhance alertness, mood, focus, motivation, and energy levels if used well. These effects can be very useful in certain contexts, such as during interval training, but harmful in other situations, for example, when trying to fall asleep. The chronic use of caffeine can lead to tolerance and addiction, but this is not a risk if you only use it once every two weeks.

Another example is Theanine. Many people say it works to enhance their mood and creativity while reducing stress and anxiousness. While it may seem you’d like most of these effects all the time, high levels of relaxation can have a negative impact on performance in certain circumstances. Sometimes when you’re interacting with people, it fits the situation better to talk in an energized and engaged manner than in a calm and relaxed way. Exercise is another example of an activity requiring a certain level of arousal for optimal performance.

Optimal brain performance looks different depending on the situation you’re in and the task you’re doing. Effects that are often regarded as benefits can be harmful if used mindlessly.

Not using high-risk nootropics in the first place is probably the most effective method for side effect prevention. Do your own research on the risks and side effects of nootropics before you use them.

There is no reason if you can avoid side effects not to utilize both acutely and chronically effective nootropic interventions.

Integrating both methods of self-experimentation is likely to lead to the greatest benefits in the long term.

This article was originally published at blog.nootralize.com; it is not a substitute for professional medical advice, diagnosis, or treatment.

How they lost 525 pounds: A successful weight loss story between a loving couple – TODAY