3 Lessons Climbing a Literal Mountain Taught Me About Losing Weight 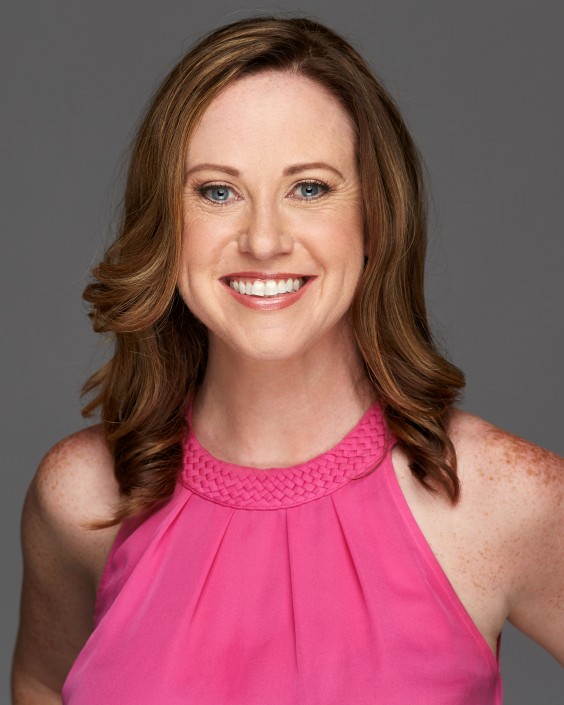 When I agreed to climb Mt. Rainier, I had no intention of really doing it. I only said yes to hush up my friends and definitely planned to back out of it at the last minute with a high-quality excuse.

It wasn’t that I didn’t want to go on this climb—of course I did! In the outdoor world, Mt. Rainier is iconic: It’s considered one of the toughest climbs in North America, and people use it as a training ground for Mt. Everest. I fell in love with the outdoors back in college, and since then, I got a job at REI, rock climbed through Wyoming, backpacked Yosemite… and basically jumped at any chance to get outside. So yeah, I wanted to conquer this mountain, I wanted the bragging rights, I wanted the Instastory. The reason I planned to bail from the get-go wasn’t that I didn’t want to do it. I just didn’t believe I could.

You see, I have a history of starting hobbies and then quickly losing steam: Marathons, yoga challenges, book clubs—you name it, I’ve given up on it. Things that require discipline seem really exciting to me… until I start. Then I remember I’m bad at regimens and never train. So even though this challenge was new, it still felt like more of the same, and I didn’t trust that I would actually follow through on it.

That’s not the case in my professional life: During the week, I stay buried under a pile of nutrition research, consult with clients, and generally do my best to save the world one sandwich at a time. I am passionate about being a nutritionist.

But things I do for myself alone—hobbies and passion projects—they always go by the wayside. So it was extra scary to imagine trying one in such a public setting: This wasn’t a secretly-signed-up-for 5K where no one would notice if I walked. This was going to be in a group, with all my friends, and it terrified me to think of them seeing me fail. It was an incredibly vulnerable feeling and still makes me a little nauseated to think about.

But with all of these reasons not to do it, I showed up. Honestly, part of me thinks I followed through in the end just because I couldn’t come up with a believable excuse in time, but let’s just focus on the fact that I got there.

More surprisingly, when I was in the toughest parts of the climb, I found myself turning to the same skills I use with my nutrition clients. I know that may seem like a stretch, but have you have ever begun another Monday, stood at the door of another gym, or started a healthy diet with a heart full of desire to succeed—but a head that really didn’t believe that you would accomplish your goals? Or have you ever wanted to make changes to your health, weight, or life so badly, but the idea of starting felt as terrifying as standing at the base of a cold, jagged mountain? If any of that resonates with you, I think you’ll be able to relate.

You Have to Go Slow in Order to Get There Fast 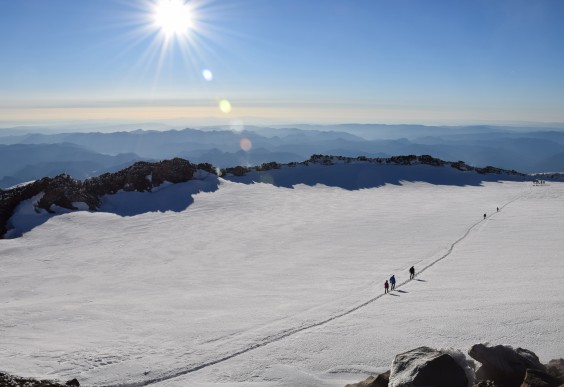 In mountaineering, there is a technique called the “rest step.” You take a quick step and then relax all of your muscles so that each step not only moves you forward but also provides rest. In practice, it means you are moving slowly. I mean really, really, really slowly. Think about walking as slowly as you can and then slow down even more.

Although this may seem nice and relaxing in theory, in practice, it basically feels like torture, especially when you first start out, feel energized, and can’t wait to get to the top. You tend to think, If only we were moving faster, we would be there already! I remember being so frustrated with the guides and 100 percent convinced that I knew more than them. I resented being slowed down… until it got really hard.

As with any project, after time passed, the excitement and energy started to fade. I was cold, my body ached, and at times, I was really scared. I realized that if we had started out faster, I would have burned out and crashed, and that I couldn’t handle the idea of the mountain as a whole, but I could pull together the energy to take one small step. If we hadn’t moved as slowly and as deliberately as we did, I can say with 100 percent certainty that we would never have made it to the summit.

When it comes to my clients’ weight loss, the biggest saboteur I see is speed. We all have these ideal numbers in our head and tell ourselves that “1-2 lbs. a week is a healthy weight loss,” or “I have so much focus and willpower right now I can just restrict even more so I can get to my goal faster.”

We start to do things that we know are unsustainable (and probably unhealthy), but the high of the moment convinces us that we have now tapped into this secret willpower and are invincible. It’s fun and exciting—you feel laser-focused, connected, and on a mission. When we look back on diets, this is the part we remember. This is the part that makes us say things like, “It worked great… when I was doing it.”

Then the excitement fades, life starts to get in the way, and you can only focus on the difficulty rather than the excitement of the goal. We typically misinterpret this as lack of willpower or self-control, but what has really happened is that our focus on speed has gotten us into a situation that we can’t sustain. Then we quit, blame ourselves, and add it to the list of reasons we’ll never lose weight.

I’ve worked with thousands of weight-loss clients over the past decade and can tell you that the people who succeed long term are those who move slowly. I mean, very, very slowly. They make small changes and are consistent, and they most often say they feel like they’re not dieting at all. But when they finally take a moment and look around, they realize how far they’ve come, and have the energy to keep moving forward.

The Summit Is Only the Halfway Point 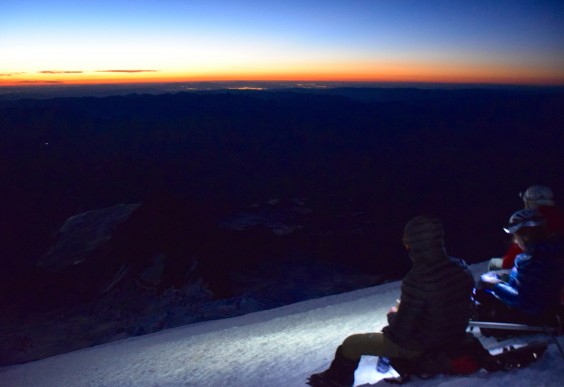 We made it! Now to get back down…
Prior to my climb, the only thing I really cared about was making it to the top. I really have no idea how I thought that I would get down, but it certainly didn’t seem like a big deal. In actuality, getting to the summit is the easy part. Getting down is not only more physically demanding, but more mentally tough. In fact, this is when most injuries happen in mountaineering. All of our focus and energy is fixated on getting to the top, so when we arrive, not only are we physically depleted, but the carrot of the summit is gone, and the whole endeavor becomes more difficult.

In weight loss, we are typically driven by a goal weight or an event, and we give little thought to what is going to happen once we get there. In mountaineering, it’s only after the goal has been reached that things tend to unravel: Our motivation is gone, and now it becomes harder to make the choices and tap into the skills that we used to get there.

My clients who have long-term success master the ability to notice small, everyday changes. They discover that they have more energy, are no longer mentally consumed by thoughts of food, aren’t stress eating, feel more confident in their clothes, and feel “normal” in social eating situations.

Over time, these small, daily successes become powerful inspiration. In fact, although my clients have typically reached their weight loss goal by our final session, it’s rarely the focus of our discussion. Instead, they share that noticing the small victories has allowed them to gain clarity about the life they wanted to live. With that clarity, each daily decision becomes a step toward that life—rather than a sprint toward a number on the scale.

You Need a Support System 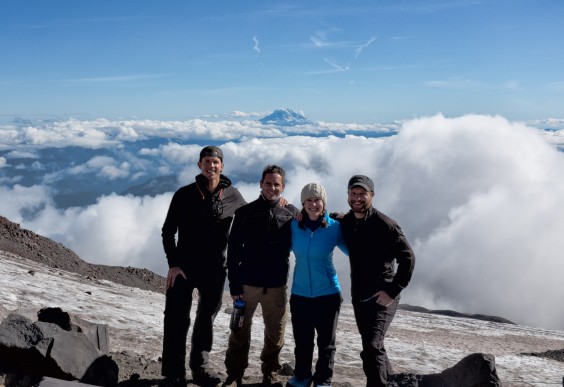 My awesome mountaineering crew
After an especially tough leg, my guide checked in with me to see how I was doing. I told him I was going to quit. Although I was tired and beat up, the real reason I wanted to turn back was that I thought I wasn’t good enough—in my head, I blew up every misstep into indisputable evidence that I was a big loser and that the rest of the team would be better off if I wasn’t there.

When I shared this with the guide, he seemed shocked. Although he said he would support any decision I made, he shared that he had led thousands of people up this very route and that he knew I had it in me to make it. He also pointed out all of the things I was doing well. I used his confidence to quiet my negative self-talk and continued the climb.

It turns out that we had just gotten through the hardest part of the climb, and it was only one more leg to the top. If I had not had his support, I would have done the vast majority of the hard work and quit right before the summit.

When my clients come to me upset and feeling like a failure, it is very rarely because they don’t have the capacity to succeed—it’s usually because they are being extraordinarily hard on themselves. They perceive one bad day as evidence that they can’t meet their goals. However, the reality is that their consistent focus on healthy and positive decisions far outweighs a few poor choices. Once they see this, they’re able to find the strength to move forward.

I’m sure that many other people who love to do tough climbs would have a very different takeaway. I imagine some of those folks would write about how they dug down deep, just believed in themselves, and used sheer willpower to muscle through. These are probably the same people who post #fitspo covered in phrases like “Sweat Is Fat Crying,” and “I Don’t Fear Pain. Pain Fears Me.” What does that even mean?

In my experience, change is hard. If you want to really conquer your goal and make that change permanent, relying on willpower is never the solution. Look back at times you’ve tried and fallen off track through a different lens, and you might find that giving willpower too much of a role was really the problem.

Instead, make sure you are taking realistic and sustainable steps. Harness the motivation from the daily victories rather than the singular goal of the summit and surround yourself with people who reflect your strengths and encourage you to keep going. This is what’s really going to get you to the top—and more importantly, safely back down again.

Tara Coleman is a clinical nutritionist with a private nutrition practice in San Diego, CA. She is passionate about giving her clients real nutrition education and life strategies so they can stop worrying about food and start living their life. Head over to her website for great info on effective nutrition, free downloads, and simple recipes.

Clark County health district tips to avoid getting the flu