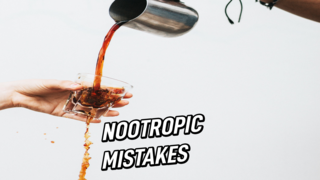 Nootropic mistakes can lead to an absence of benefits and the presence of unwanted side effects. Avoid these common nootropic use mistakes to get the most out of your nootropic use.

1. Using stimulating nootropics in the evening

Using stimulating nootropics, for example Caffeine, Theacrine, or Modafinil in the evening will disrupt sleeping patterns and impair your cognitive performance in the long term.

2. Using relaxing nootropics in the morning

Nootropics that can enhance sleep, such as Melatonin or Valerian, are often not good to take anytime else than in the evening.

Acute and transient lack of motivation and energy are side effects you will want to look out for if you experiment with relaxing or anxiolytic nootropics in the morning.

3. Buying a nootropic product without checking the 3rd-party certificate of analysis

A 3rd party CoA is a document that is produced by some external body— a laboratory that is not the producer of the nootropic. The documents are created to give nootropic retailers and consumers a feeling of certainty concerning the safety and contents of the product.

Because a 3rd party CoA regards a specific batch (one round of manufactured products), companies often decide to encourage their customers to email them to ask for a 3rd party CoA instead of displaying them directly on their websites. If you cannot find a 3rd party CoA on a company’s website, ask them for one via email. Don’t buy a product that doesn’t have a 3rd party CoA or else you risk getting no active ingredients and in some instances even dangerous ones.

Many nootropic products are not quality-checked by official authorities. This leads to a high risk for unwanted ingredients such as heavy metals.

All you have to do when reading a 3rd party CoA is usually to see that the amounts of the ingredients examined meet safety standards, that they “conform” to the criterion doses — which are often defined by government bodies.

If you’re about to do something very important to you, for instance going on a third date with someone you like, you want to play it safe on the nootropics front. A nootropic that is great for helping you perform when coding may not work well for you on a date where you want to connect with someone.

Stay with tried and context-tested nootropics to avoid unwanted side effects or benefits that don’t fit well into the context.

5. Using nootropics without a purpose

Using CBD oil because you heard its good for your health may not be a bad thing, but timing the use of it to 20 minutes prior to your public speech may help you reduce public speaking anxiety [2].

Knowing why you’re using a nootropic can help you figure out how to use it in the most efficient manner. It is the first step in figuring out when, how, and what to use.

6. Using too much of a nootropic

Using too much of a nootropic can lead to side effects and diminishing benefits.

When you start using a nootropic, use it in small doses, and work your way up to larger amounts until you’re at the level that has evidence backing its efficacy for the effects you want.

7. Using too little of a nootropic

Starting with small doses to assess the perceived safety of a nootropic can be a good strategy to avoid side effects, buy never upping the dose to adequate levels will probably lead to a lack of benefits.

There is usually a dose-range that has been studied and proven effective for any specific nootropic. Use nootropics in the studied doses and reduce or increase the dose depending on how you respond.

8. Unintentionally breaking the law with your nootropic activities

Regulations of nootropics vary between countries, depending on which nootropic the laws regard, and what you aim to do with the nootropic.

There are different laws for different activities. For example, buying online from another country is usually more tightly regulated than simply possessing the nootropic.

Research the legality of the nootropic activities you’re looking to engage in before carrying them out.

9. Not giving the nootropic enough time

Some nootropics acutely enhance cognitive performance and mood, such as Caffeine. Other cognitive enhancers exert their full nootropic effects after several weeks, such as Bacopa Monnieri.

If an effect from a compound was found with a specific dosage regimen for a specific duration, using the nootropic more or less than this duration is unlikely to yield the desired effects.

For example, most of the studies on the memory-enhancing effects of Bacopa Monnieri have a duration of 12 weeks [3][4]. To get an accurate answer to whether Bacopa Monnieri works for you, using it for 12 weeks in appropriate dosages is a good strategy.

The effect size of a nootropic can be large, such as in the case of Bacopa Monnieri. According to a meta-analysis on Bacopa Monnieri, it improves performance on the delayed word recall test [1]. This test measures a person’s ability to remember words they were exposed to more than 15 minutes ago. The long-term memory enhancement observed from the use of Bacopa Monnieri could be very useful for anyone trying to learn information about a new field, such as college students or non-fiction book lovers.

Perhaps the biggest mistake you could commit as regards nootropics use is to dismiss them altogether.

This blog post was originally published at nootralize.com, it is not a substitute for medical advice, diagnosis, or treatment.

Your Dog Needs Healthy Food. Here’s What That Means – DogTime